Tim was fascinated by pianos - or anything remotely piano-shaped - from an early age. Here he is at eleven months old, doing a 'Schroeder' impression: 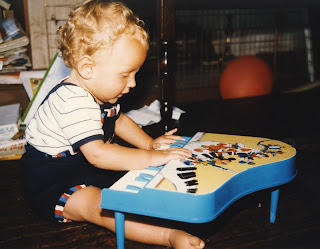 .. and eighteen years later here he is, a couple of months ago, confident and competent as the musician at St Helena's Church (playing here with Daniel on clarinet, on Easter Sunday 2008) : 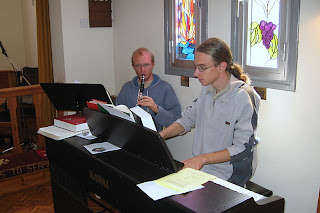 When we moved to Cyprus, we were concerned about music lessons. Neither Richard nor I are musical, and we knew we were going to home educate. In Birmingham in the UK, they learned the recorder at school, Daniel learned clarinet and Tim would probably have started a band instrument the term we left. They sang in the school choir, and also the Bournville Children's Choir, and both took piano lessons from the Children's Choir leader, who lived not far away.

When we said goodbye to the church we belonged to in Birmingham, we were all asked what they could pray for, as we started our life in Cyprus. Daniel and Tim said they were worried that we wouldn't be able to get (or afford) a piano. So the congregation said they would pray...

Even before we found somewhere to live in Larnaka, we heard of an elderly lady who was moving out of her house to a small flat, and needed someone to look after her niece's piano for a few years. It was old, and needed gentle handling, but was a lot better than the very cheap piano we had in the UK.

We just wished we'd also asked the congregation to pray for beds and tables and chairs....!

So all we needed was lessons. Two of Richard's colleagues turned out to be piano teachers, so one of them taught the boys for a couple of years, then when she left the other one took over. Neither of them would ever accept any payment.

Daniel stopped piano lessons a few years ago, but Tim continued and took over as organist at St Helena's a couple of years ago. He's also been the keyboard player for the youth group band. He played mostly for fun, not doing any exams until in 2006 he realised that Grade 5 could count as an elective option in the home education program he was doing. So he took Grade 5, although he was probably well beyond that level, and passed with Merit. He also took music theory grade 5, and - much to his surprise - passed with Distinction.

However his teacher was retiring. We didn't know of many teachers who would teach piano beyond Grade 5 level in Larnaka, which is rather lacking in pianists. But a friend recommended her teacher... who turned out to be ideal.

Last week he took the Grade 8 piano exam. Today, he learned that he passed with Merit.
Posted by Sue at 18:22

I often think the things babies are interested in are a sign of things to come..... Jorja loves drums. :D