Yes, I do have my hands full! 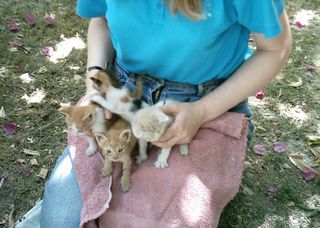 The seven tiny feral kittens survived another night. I fed them more evaporated milk from the bottle, and a triangle of cream cheese first thing and they went back to sleep again. At 8am I walked to our PO Box since I hadn't been there for a few days - Daniel's expecting a couple of parcels from ebay, but they hadn't yet arrived. However I was pleased to find another parcel from Play.com with the books which were dispatched about ten days ago.

The pet shop near the PO box was open by 8.30 so I went in there and asked if they had any Lactol or other kitten milk. The owner didn't speak much English, but clearly knew what Lactol was; however he said he didn't have it, or any other milk for cats. He said they had stopped importing it. However he did sell me some dry food intended for very young kittens, between one and three months old. There are instructions on it in several languages, although unfortunately there's no English (or French, which I could probably have translated). But I could guess at enough Italian to work out that this food needs to be mixed with water. I can try that in another week or so.

I decided to try another pet shop anyway, and to my relief I saw two containers of Lactol almost as soon as I walked in! I don't know if this means they're left over from before importing stopped, or whether the first shop owner simply meant that his shop wasn't getting it any longer. Anyway I bought some, and another little feeding bottle as it would be easier to have two.

Daniel was in Nicosia this morning with a theatre group performance, but Tim had his oral music lesson as usual. We told his teacher about the kittens on her way out, and she said that the Cat Protection League charity shop downtown will take unwanted or feral cats to one of the cat sanctuaries. She thinks they probably need to be weaned first, but that's OK: at this age they're fun to feed and play with. Feral cats usually stop being cute by the time they're a few months old but it does concern me that these kittens may become too dependent on humans. If they could go to a sanctuary where cats can be free, but still somewhat looked after, I should think that would be ideal.

Tim took the photo above after they had been fed around 11am. They were all very playful, and spent a lot of time pouncing on each other and rustling leaves, and experimentally washing themselves. The latter was quite amusing as they tended to overbalance, but at least they're getting the idea. Suddenly some of them came and climbed on me even though they were no longer hungry - probably we should discourage that but it's very difficult as they're so adorable at this stage! I'm putting out a shallow container of water and one of them even managed to lap some of it, so that's encouraging too.

Dan just phoned to say he's still in Nicosia. He wanted to buy some clarinet pads from a shop he knows there, so the theatre folk dropped him off nearby. He said he'd had something to eat and was waiting till the shop opened at 2.30 (most places close over lunchtime here) and will then get a service (shared taxi) or bus home.

Oh, how sweet. I remember putting milk on kitten food for very young kittens, so I think you're probably right about the directions. Of course, you might type them into babelfish to see what the English translation is. :) I've tried it with knitting patterns with no luck whatever.

Do the kittens have names yet? Liesl, Kurt, Gretl, etc? ;)

No, we're determined not to name them as we're not planning to adopt them!! Although Dan has decided the most confident ginger one should be called Darwin: this kitten fights for his food, pushes the others out of the way, and (as Dan said) seems determined to prove that he will personify survival of the fittest even if none of the others do!

It must be very difficult to live in a country where you don't speak the common language.

I did manage to find loquats. They are a bit smaller then I imagined, perhaps an inch and a half in width. Are you suppose to eat the skin? It seems a little thick for it, but edible. They have a good flavor, similar to a peach. But with such large stones, there is so little flesh on them. It seems hardly worth the effort. You have been very dedicated in your food preserving. I'm glad I tried them, but I probably won't seek them out again.

Most people do speak English - many of them fluently, the others with enough to get by. We all tried to learn Greek when we first got here, but the locals wanted to practise their English so we never got much chance to speak it.

Loquats - yes, they're a fair amount of effort for not much fruit. We don't find the skins tough, but then ours are all fresh from the tree. I don't know if they toughen a bit with keeping. They're about the size of apricots, so it sounds as if you found the right thing. I don't think I'd bother with them if we didn't grow them ourselves!

Cute little things! Wouldn't last a minute in my back garden - Emmy'd have 'em! A hamster in a cage, no problem. But 7 kittens? Wow, it's a pretty big deal. Adorable little animals!