We still have seven feral kittens... although as someone commented, they're not really feral any more. They're entirely tame, and reliant on people to feed them three times a day.

I went to talk to the Cat Protection League charity shop on Tuesday morning. They said that the Paphiakos animal sanctuary is still taking animals, it has official permission to build a new site, and the lease of its current location has been extended beyond the end of June. Where possible, they find families for kittens. A truck comes to Larnaka once a week and can take any animals to the sanctuary. They even said we can borrow a large cat box (since the one we have is far too small for seven kittens) and I've provisionally booked a slot for some time next week. They're about nine-and-a-half weeks old now, pretty independent and starting to explore more and more.

Of course I'll hate to see them go, but I don't think it would be fair to send four or five of them away and leave the others here. No way can we keep all seven (eleven cats?? No way!) but keeping two or three would be quite nice...

A friend said that she MIGHT know of people who MIGHT take a kitten or two. Or maybe two sets of friends who might take four between them. If we can find homes for four (or five) then we'll keep three (or two). But I think it's unlikely, somehow, and part of me would rather keep life simpler with our four adult cats who are much less demanding. 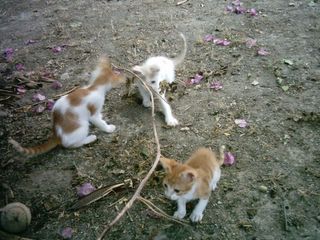 Here are some of the kittens playing with a stick. They rarely stay still long enough to be caught on camera, though! 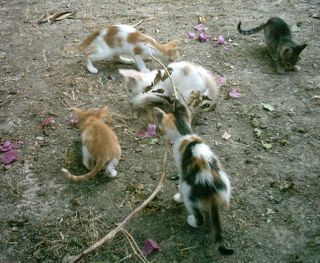 Your adult cats may be much less demanding, but kittens are just so wonderful to have around. Cute pictures.