Daniel says he is spending his first week in Larnaka relaxing. 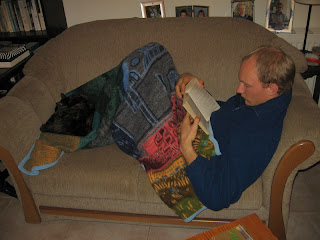 He is determined to do nothing more exhausting than reading for this week, although there are many things he wants to do during his three month furlough. But he was tired when he got here, despite nearly two weeks in the UK after leaving the Doulos. The problem, as we always find when we're in the UK, is that he wanted to see lots of people - all his grandparents, and some other relatives and friends.

So he found himself rushing around, very much enjoying seeing people whom he had not seen for over two years. He also got to know the UK public transport system much better than he had done before! When he arrived in Cyprus, he said he would be very glad not to see another train for a while... which is easy enough to grant, since Cyprus does not have any trains!

Anyway, he loved seeing so many folk and appreciated all the hospitality. But all he wants to do at present is sleep, and read, and watch DVDs. He hasn't left the house since Monday evening (when he accompanied Richard to an evening meeting).
Posted by Sue at 17:49