It has already been an incredibly dry winter in Cyprus, meaning that our low water supplies are now at extremely serious levels. It has also been much warmer than usual, other than in January.

This weekend, the temperature in Larnaka was 25C. In the shade. Even Richard took off his sweatshirt and spent a couple of hours in shirtsleeves in late morning. In Nicosia, apparently, it was reported to be 30C on Saturday. That's the kind of temperature we expect in June, not March.

By evening there was a bit of a breeze, and I don't think it's been quite so hot today. But even so, it's tiring.

Still, the plants on our front porch seem to be enjoying it. The fig tree, which lost all its leaves late last year, is now in leaf again, looking healthy and glossy: 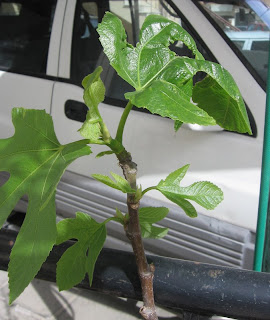 The citrus trees are covered with early blossom, too, although no doubt most of it will fall off: 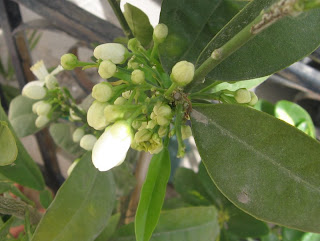 It would be nice if we actually had a lemon or two this year, but the plants may still be too young. One or two of the buds have even opened out into flower - the scent is amazing: 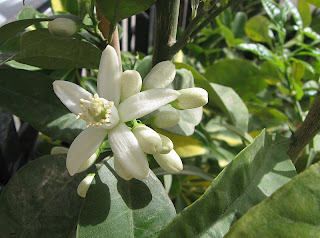 The petunias have been doing magnificently - they're almost past their best, but should keep going for another month or two before it becomes too hot for them. Assuming, of course, that the temperature doesn't keep on increasing: 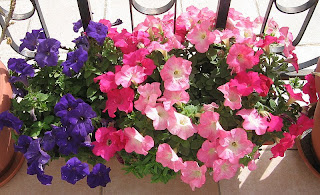 Even the bougainvillea is beginning to develop pink bracts:

We've had a snowy Easter in GB - weather more like Christmas is supposed to be. It's still on the ground in patches. Enjoy your sunshine!