In our Protestant tradition, we don't tend to fast during Lent. Some people might give up something for the season - chocolate, perhaps, or alcohol - but it's not expected.

In a nutshell - as we were told when we first came here, over ten years ago - they don't eat any meat or fish (other than shellfish) during Lent; they don't drink any wine, except on Sundays during Lent; and they don't have any dairy products.

The point of fasting is to lead to a deeper spiritual experience of God, and as preparation for Easter. It's to remind us of Jesus in the wilderness, too, and - perhaps - to give away a little more money to the poor.

In other words, whether or not one is legalistic about it, the principle is to abstain from something one usually enjoys, and focus more on God.

All well and good.

And yes, I know Easter in the Western world was last Sunday, but in the Eastern church it's another month away. So they've had just three weeks of Lent, so far.

Many of the Cypriots are only nominally Greek Orthodox, and take little notice of the Lenten fast. We see them buying meat in the supermarkets, and while they don't tend to barbecue during Lent, we can certainly smell meaty scents of cooking, as usual. That's fine - fasting, Jesus told us, is to be done secretly and according to one's conviction.

But in recent years, we've noticed a much more disturbing trend. It started with McDonald's producing a new meal which they called 'McLent' - basically a veggie burger. It didn't take long for other fast-food places to catch onto the idea.

Last year I wrote a post about Lenten 'fast food' advertising. I thought it was a one-off.

Not so. This week, we have had THREE pieces of junk mail advertising - with green background - their special Lenten fasting offers.

Firstly there's Pizza Hut. They're advertising their potato wedges, meat-free pasta sauces, and salads. They still only seem to have one veggie pizza but it has no cheese topping during Lent: 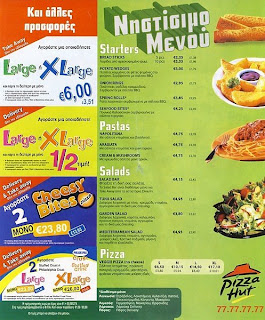 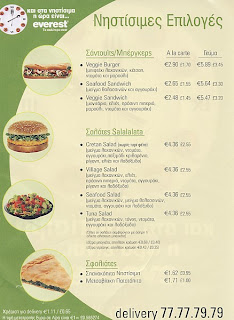 Then finally, the one that really makes me cringe: KFC, famous for their chicken, offers veggie burgers, veggie twisters, salads, and spring rolls. Plus special deals - any of the above with fries or onion rings and a fizzy drink: 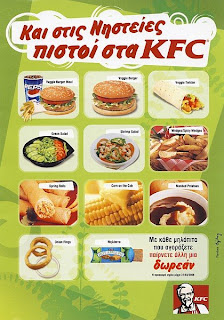 I'm not a fan of fast food at the best of times. But all this seems so sad - it's encouraging people to stick to the letter of the law, while completely ignoring the spirit of it. I can only assume KFC's campaign last year was successful, since they're repeating it, with even more offers this year.

Oh, that is just so wrong to cheat like that!

If I gave up meat and fish and chocolate and dairy all at once, yikes, I probably would draw a little closer to God!