Trying to keep the cats in overnight

Ever since Jemima vanished last November, we've been more careful about keeping the other three cats in overnight. Through the winter, this hasn't been a problem - they would much rather sleep on a warm, soft, occupied bed than outside on a cold, hard surface.

A couple of nights ago I was working on my home education web-site - updating yet again, with a new style - and didn't really think about the cats until I switched off my computer around 10pm. Richard and Daniel were out, but Tim was in his room.

So I popped my head around his door, and asked if any of the cats were with him. Yes indeed - he had Cleo on his bed: 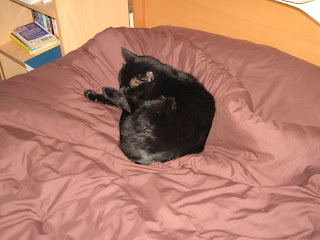 And Tessie was sitting on his lap while he typed: 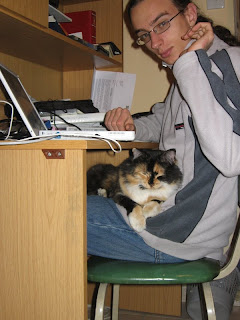 But he couldn't remember seeing Sophia for a couple of hours.

So I looked in our room, and then in Dan's room - which is Sophia's favourite place to be.

So I checked, again, in the living room and study. I looked under the dining room table to see if she was on one of the chairs.

I went out onto all the balconies, and called.

No sign or sound of Sophia. And she can make a LOT of noise when she wants to!

I went downstairs, and checked the guest flat - though I couldn't see any way she could have got in there in the last three hours. I went up and down the street a little way, calling quietly and also listening, in case she had got shut in someone's shed.

Still no sight of sound of Sophia.

I was getting quite worried by this time. I went back into the house, and checked yet again all the places I had already checked...

Then I went back into Tim's room, almost in despair. Where on earth could she be? I wondered if I should phone Richard and Daniel (who were doing something at Richard's office) but it seemed a bit silly. However I was sure I wouldn't get to sleep. Our neighbourhood is very friendly, and has a fair number of cats, but in general Cyprus is not a good place for cats and I hated the thought of her falling into the wrong hands.

Then... I just happened to glance up at Tim's tall bookcase. On top of it is a brown patterned blanket, which he used on top of his duvet during the winter. Soon I'll wash it and put it away for the Summer, but we might still have a cold spell, so it's just roughly folded and sitting on Tim's bookcase.

As I glanced up, I saw something twitch gently.

I backed away and stood on tiptoe.

Yes, there was Sophia, very comfortable, and so fast asleep that she hadn't even heard me call! 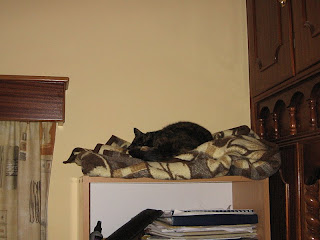 (She looks fairly obvious in the photo, but I took it by holding the camera above my head to get a better view of her).

I am thankful, too, for your and Sophia's sake.
One daughter has two cats and love them and grandkids have cats and they love them, but I do not like cats, nor dogs.
Does that make me hateful?? I will allow them but not love them.LOL
Betty G

What a relief we all get when we're safe and sound. Usually when we are not in plain site it's acoz we are in front of da firebox gettin all toasty.

I hate that feeling of not knowing where the cat is. Normally Puddy is hiding somewhere and watching me search! I'm glad you found her - it looks like your cats have a favourite bedroom. :)

I am sorry Jemima never turned up. I would be like you, under the circumstances, more watchful of the remaining ones and keep them in at night. I sometimes panic about where our cat is. It is annoying that when you call them they don't miaow at you in response.