Showers and thunderstorms have been forecast for the next few days. Sure enough, there was some rain today. It's often quite dramatic here when the sunshine vanishes, to be replaced for a while by dark grey clouds.

I first became aware of the wind whistling around the house - and it really did sound like whistling - shortly after lunch. The sky gradually darkened, and I saw the occasional flash of lightning. Even then I didn't really think... it wasn't until I saw rain start to fall that I remembered the washing I had hung out on our utility balcony a few hours earlier. I managed to rescue one dry item, and the rest will have had an extra rinse. The balcony is covered, but the rain was far from vertical.

I think it rained for at least half an hour. Fairly steady rain, after the initial wild onslaught. Just what we need, although rather more than half an hour.

When I saw sunshine creeping through the clouds, I grabbed my camera and headed for the balconies. Sure enough, there was a rainbow. I caught one half out of the back door: 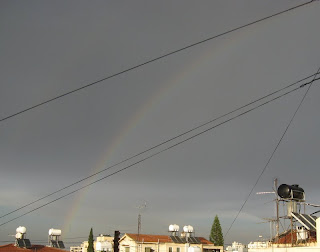 and the other half out of the front door: 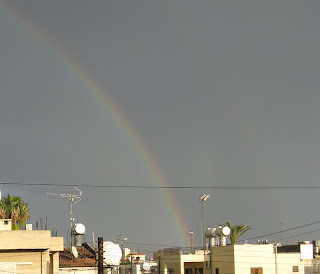 This evening it feels almost chilly. Richard went to find a sweatshirt when he got home after work. I'm wondering if it's time to put the shorts away for the next few months yet...
Posted by Sue at 21:53

So thankful for the rain and I know you are also! Is your water rationing still on?