On Tuesday mornings I help at the local toddler group. Afterwards I take a slight detour on the way home to visit my favourite Froutaria (roughly the equivalent of a traditional greengrocer in the UK). 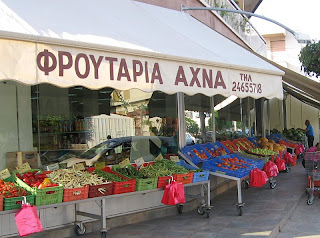 I wanted some apples and pears, for making fresh juice in the morning. I also wanted some cherry tomatoes and garlic, as we were almost out of both. And I thought I might buy some lemons, if they were a reasonable price, as the citrus season is starting and I made my first batch of lemonade a couple of weeks ago.

Outside the froutaria are stands with boxes of fruit a day or two old, on special offer. Usually well under half-price, and basically in good condition although one has to sort through them to avoid any that have gone bad or squashy. I usually buy fruit for smoothies from these boxes, so was pleased to see peaches and nectarines still available inexpensively, and also some rather nice-looking plums. I found apples and pears in the reduced boxes too, so had quite a weight of fruit before even going in the shop.

Inside I found the garlic, tomatoes and lemons, and also some broccoli which I had forgotten I needed. And some rather nice looking grapes, although not particularly cheap. So I ended up with two fairly heavy bags to carry home - fortunately only about half a mile from the shop.

I had vaguely been thinking I would put all the fruit in the fridge, then deal with it tomorrow. On Wednesdays a friend goes into Richard's office to do the week's bookkeeping, and usually comes hom for lunch with us. My Wednesday mornings are usually taken up with cleaning out the fridge, dealing with any fruit and veg, and perhaps doing some cooking for lunch. In the winter I make soups, and last autumn and winter made a batch of lemonade every week or two on Wednesdays.

Then I remembered that we used to have mains water every day, but of course it's only every other day now. And whereas there's plenty in the tank, I do prefer to wash fruit in mains water, and to cook with it. Lemonade takes quite a lot of water, and while we fill up plenty of water bottles, I don't really want to use two litres of stored water for cooking.

So this afternoon I washed all the fruit and veg, and made the lemonade. I love the scent of lemon juice, which is pervading the house right now. I've made us a peach smoothie to go with our evening meal - I'm quite surprised we're still getting peaches so late in the year; fruit here is mostly quite seasonal. I was surprised to see such nice grapes, too. They're usually finished by now - or getting very sweet and squashy.

Still, it's good to be flexible, and I do like the variety of good fruit and vegetables we get here, most of them grown locally. There's not much that's organic, but at least they're not imported from other continents. So they're picked when they're ready, and usually taste much better than the UK equivalents.
Posted by Sue at 16:52