Green Monday and a walk by the Salt Lake

Yesterday was a public holiday in Cyprus. Yet another one! This time it was for Green Monday (also known as Clean Monday), the first day of Lent for the Greek Orthodox and other Eastern churches. Eastern Easter is only a week after Western Easter this year, so their Lent begins the week after the Western Lent - except that it begins on the Monday, not the Wednesday.

According to Steve, a Greek Orthodox friend in South Africa, Clean Monday is a day for forgiveness. However, I have not come across that tradition in Cyprus. This is a country where over 90% of people call themselves Orthodox... However, as a friend in Paphos explains, Green Monday is when everyone goes out on a picnic. They don't eat any meat, and the children fly kites. I did hear, some years ago, that people traditionally clean the house from top to bottom before the picnic, and I did notice some neighbours extensively cleaning their patio in the morning. But the main focus here is the picnic, even when - as happened yesterday - there's not much sunshine, and a distinct chill in the air.

I didn't go on a picnic. I've only done that once in the eleven years we've lived in Cyprus. However, in the afternoon I did join a friend for a walk around part of the Salt Lake. She hadn't done that before, and I hadn't been for a couple of months. we were both amazed at the abundance of the wild flowers: 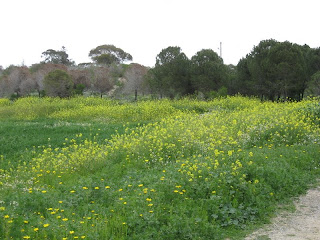 I haven't seen such an amazing display of wild flowers in many years. The large amounts of rain we had in February are no doubt responsible for their size and splendour. 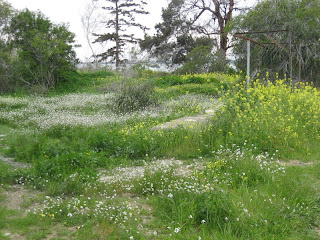 Most of them are yellow - as I've said in previous years, March is sometimes known as 'yellow month' in Cyprus. There were many other colours too, however. 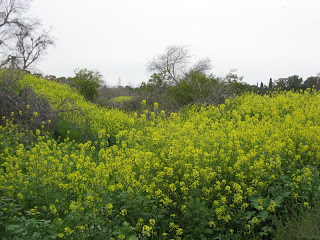 The Salt Lake was looking pretty good, too. More water than I've seen in a while, although it will probably go down if the sun comes out in the coming weeks. 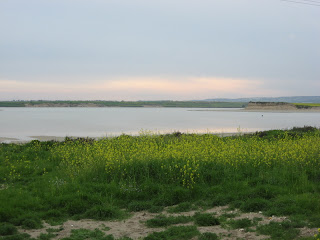 It might have been on the chilly side for a picnic - although evidently most people didn't agree. We saw several families who had been picnicking and kite-flying in the Salt Lake Park - but it was, from my perspective, a perfect day to go for a walk. There was enough chill in the air that I didn't feel too warm, and there was no sun to give me a headache. 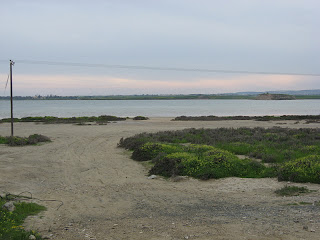 Beautiful and so nice you could enjoy it.
Betty G

Actually it is the day before that is called Forgiveness Sunday, or Cheesefare Sunday, because it is supposed to be the last day one can eat eggs or dairy products before Lent begins (for the same reason that in England Shrove Tuesday is sometimes called Pancake Day - one makes pancakes to use up all the eggs and butter before Lent.

We went out to the monastery site in the country, and prayed most of the morning. There was a lunch, strict vegan, with no cooked food. The first week of Lent is supposed to be the strictest fast of all -- xerophagy, as the Greeks say; dry eating, nuts and twigs.