Several more days out of Cyprus, and a walk in the park

Since last Wednesday, we've seen most of my family, which has been enjoyable. One brother and sister-in-law came for the day on Wednesday, the other came on Saturday and stayed the weekend. My sister and her family came on Sunday, so there were ten of us for lunch. On Thurday we drove the half hour into Alcester to see my father and his wife for the day.

Friday lunch-time we went out with the new vicar of Christ Church for lunch, so we could get to know each other somewhat, and so he could learn about Richard's work. On Sunday Richard did a ten-minute chat in the morning service, and a longer tea-time presentation with discussion in the afternoon.

Since my family were still here, I opted out of the tea-time meeting, and instead went for a walk with my sister and her family, and their dog Dylan. I'm by no means a dog person, but Dylan is really a very amenable and friendly dog.

The sun was shining yet again - surprisingly, although there have been two or three days of rain in Cyprus since we left ten days ago, it hasn't rained here at all! We walked to Highbury Park, and since we don't get much greenery in Cyprus I took a few photos: 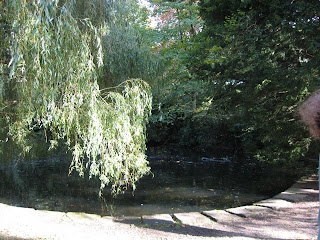 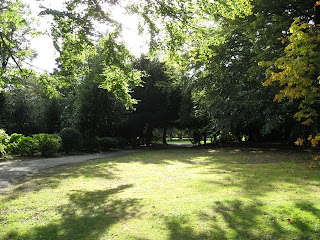 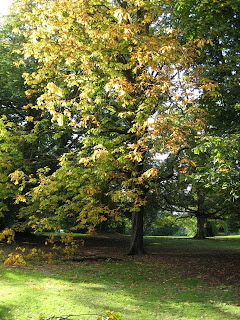 What surprised us all was to see several patches of crocuses around the park. We all thought they were winter flowers only. If they're not crocuses, they're something remarkably similar: 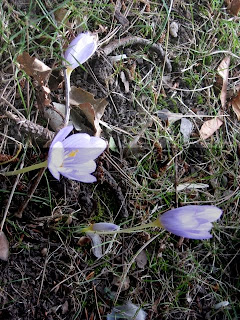 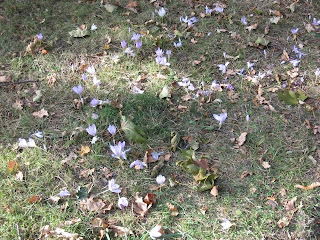 They look like autumn crocus, a diagnosis confirmed I think by http://en.wikipedia.org/wiki/Colchicum_autumnale

Aha, thanks Rosemary. I've never heard of Autumn crocus, but it sounds as if that's exactly what they are.