Merchant of Venice in Kurium

Every year there's a Shakespeare production in the amphitheatre in Kurium, near Limassol. It's usually performed on three nights towards the end of June, or early July. We don't go every year; sometimes we have other commitments; sometimes we don't remember it's happening. Sometimes we aren't particularly interested in the play being performed... and sometimes we decide it's not worth the cost. Tickets are not cheap, although the proceeds do go to a worthy local charity.

The last time we actually went to one of these Shakespeare productions was four years ago, when we went to see 'Midsummer Night's Dream', which had a most impressive set.

We wouldn't have known about this year's until too late, but some friends mentioned that they were going on Friday, to see 'The Merchant of Venice'. It's a play I studied at school for 'O'-level rather more years ago than I care to count; but I remembered it, roughly, and thought it would be fun to see it live. Daniel had already said that he'd like to take Becky to see Kurium at some point, and that he enjoyed the Shakespeare plays. I was a bit put off by the cost - twenty euros each - but we decided to splash out and use some money we'd been given to use 'for ourselves'. Besides, seeing a Shakespeare play at Kurium is a unique Cyprus experience, and Becky is in the country for the first time.

We ate early and left at 6.30pm, armed with some cushions from the guest flat, since the stone amphitheatre steps are not exactly comfortable. Just as well we allowed plenty of time; we thought Richard knew the way, but we took a wrong turning, and then another one, and ended up driving several miles out of our way before finally reaching the Kurium site with about ten minutes to spare. Parking was near the top this time, and we were shown into one of the last parking spaces available.

The set was a simple one, with a white bridge to signify that it was to take place in Venice: 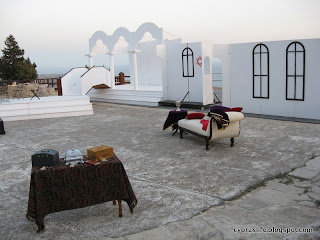 There was a reasonable audience, but not too many people in the side wings of the amphitheatre. Since we could see that parts of the set were on the right, we decided to sit there: 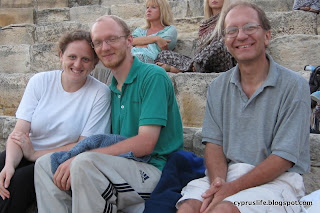 To my surprise, the play started at only a couple of minutes past eight. 'Cyprus time' is usually at least twenty minutes after the given start time - and, indeed, there were quite a few stragglers in the audience.

I was pleased, and a little surprised to find that I remembered a few of the speeches, and most of the plot. The first part of the play is a little dull and somewhat confusing, when several people with long, Italian-sounding names discuss merchandise, and money-lending, and love: 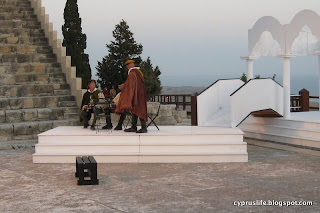 But then came the sub-plot I remembered best, that of Portia whose father had decreed that she must marry whoever chose the correct one of three caskets. Portia has a strong part in the play, and was extremely well acted: 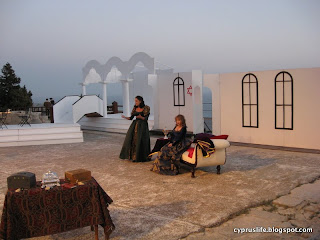 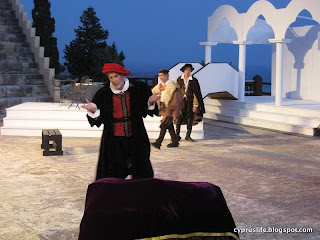 Daniel and I both particularly appreciated the second of the suitors for Portia's hand, the one who chose the silver casket and who spoke with a delightful Cypriot accent. Unfortunately, I only managed a photo of the first suitor, who spoke with a pseudo-French accent: 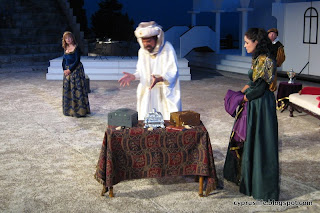 And of course I had to take one last photo, before it was too dark for cameras (since flash was not permitted) - the successful suitor, who correctly chose the lead casket with the inscription: 'Who chooseth me shall give and hazard all he hath': 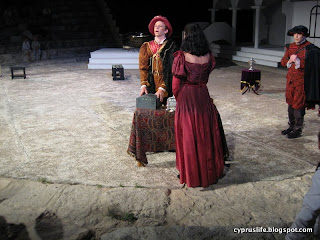 The first act was an hour and twenty minutes - as we were told just before the play started. There was then a twenty-minute break which gave us a chance to stand up for a while, and the second act was an hour long. It was 11pm by the time we got away, and 12.30 before I was in bed.

Great pictures Sue and a wonderful sight. We visited it several times, always in the daytime and it was very hot...but that's Cyprus in the summer. Thanks for sharing!