On Thursday evening, we were asked to Tim and Erika's penthouse apartment. It was rather a last-minute arrangement, since we had been planning to eat at the marina, only to learn in the afternoon that it doesn't so evening meals. So Tim said he'd bake some potatoes in his barbecue, while Erica made a filling, and I made a salad.

They have great views over Larnaka from their balcony area, where we sat out. And while the flats in this photo aren't all that interesting, we spotted the moon, while it was still quite light, just over the top of one of them: 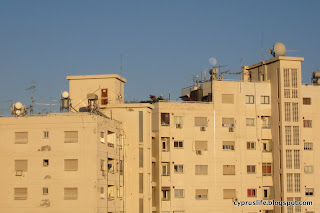 The sun was still out, but Daniel and Becky stood in exactly the right place to shield me from the glare... 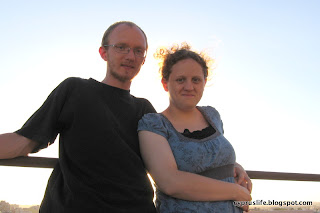 We enjoyed the food, and the company, and then I took another photo from a different angle, as the sun started to set. This shows some of the mountains of Cyprus on the horizon: 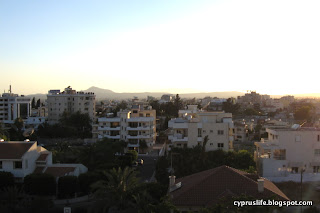 Here's the view from yet another angle: 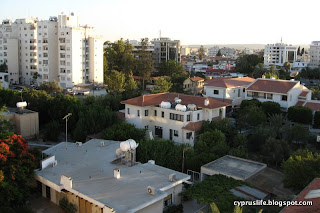 Once it was completely dark, Chris - who has a much more expensive, fully adjustable camera - tried to set it to take a photograph of the lights of Larnaka. He had some trouble getting the effect he wanted. I simply switched my camera to 'night view' and got pretty much what he had been aiming for without knowing anything about exposures and so on: 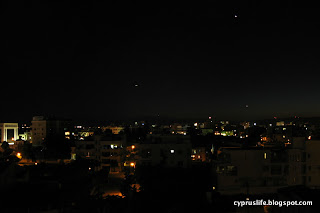 On Friday evening, we went to the bi-weekly inter-church cell group meeting at Jörn and Sheila's home. We haven't done any studies for a while; we eat together and chat, and enjoy each other's company.

Once again there was plenty of good food and interesting conversation. Then, when some folk had left, and we were beginning to think about going, Chris was brave enough to let Lukas try out his expensive camera: 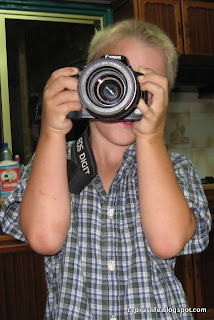 I was somehow persuaded to let Katie use mine, and she took this one of Chris, who looked a little worried, possibly wondering what Lukas was doing with his camera: 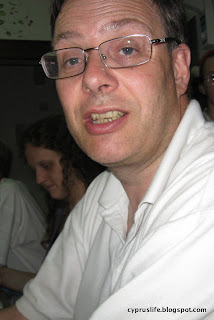 Lending Lukas a camera, even for a few minutes, is a good way to become his firm friend: 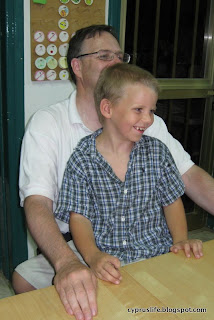 Then Daniel offered to have a look at their wall-fan, which was rattling rather badly: He handed the parts to Becky as he dismantled it, and she looked rather long-suffering. 'Oh, Becky's used to it,' Daniel remarked, when I said she didn't look too happy about it. No doubt she is.. 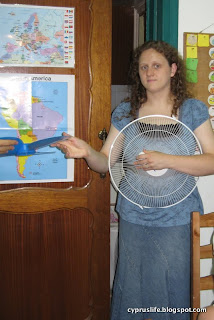 Loved the scenes....reminded me of John and Meg's. We were with friends here in Wichita the other night. They followed us in '06 in Cyprus....The moon was almost full and I commented about the full moon in Cyprus over the valley in Troodos. We all said we always think of Cyprus when we see a full moon....beautiful!

Hi, Sue! I don't think I knew about your blog, so was glad to get your link to it on Facebook!

It's so interesting to see the kind of place you inhabit! And so funny that you got such a good photo of the sky! Modern 'point and clicks' are great, aren't they? I have both kinds of camera and want to relearn all about exposures and shutter speeds, but modern 'auto' settings are so tempting to stick with!

I'm glad the boys seem to be well and happy. I'll keep an eye on your blog from now on! My name at the top of this one will give you a link to mine, if you'd like a look. My surroundings are not nearly as exotic as yours, however!