Recycling in Larnaka - at last!

In the UK, recycling is a way of life now. Everyone we know sorts out cardboard, glass, plastic and so on, separate from other general rubbish. Some have to sort them into separate boxes, some use wheely bins, some large sacks... each district has its own methods. But the whole country now recycles large quantities of household rubbish.

One of the things I found difficult about living in Cyprus was the total lack of recycling facilities. At first we kept jars and bottles and paper, in the hope of finding somewhere. A few times, friends were going to Dhekelia, where there are some recycling facilities on the British army base, and took some boxes of old papers for us. But it's not worth driving that far - thirty or so kilometres - just to recycle. More would be wasted on petrol than would be conserved.

So I have re-used jars for jam and chutney, kept margarine and ice cream tubs for freezing food portions and home-made ice cream, and plastic bags for bin-liners and disposing of cat litter. We have re-used water bottles, and tried - where we could - to minimise waste. Eventually, a couple of years ago, I realised that there was no point keeping stacks of paper that would blow away or get rained upon, and empty bottles to get full of dust. So I gritted my teeth and started throwing them out with the rubbish. The dustmen come three times each week, and we only really half-fill a black sack each time, when there's just the two of us. Since we no longer have a compost heap, I don't think that's TOO bad... certainly not compared to our neighbours.

Imagine my surprise when, last night, I picked up the junk mail (or so I thought...) from our outside mailbox. One item was in a plastic bag, and I almost threw it straight in the dustbin... but, thankfully, brought it upstairs.

Inside were two large folded plastic bags. And a booklet, half in Greek and half in English, telling us that recycling has come, at last, to Larnaka and the nearby districts: 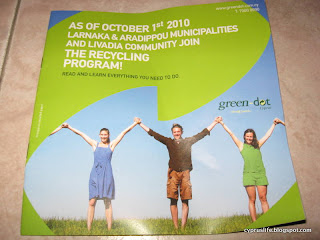 I was delighted! I had almost given up hope of it ever happening - and assumed that, if it did, it would be fairly chaotic. Perhaps it will, but the plan, at least, seems very well thought-out. Glass, it seems, will have several collection points. As they point out in the booklet, broken glass could be a problem if it was collected along with other recycling. I didn't recognise most of the collection points, but there's one at Metro supermarket. It's not as if we get through that much glass: a jar of mayonnaise perhaps every couple of months. A little Marmite, now and again, although I don't eat it any more and Richard doesn't have much. The occasional wine bottle, if friends who like wine come to dinner. I'm sure I can keep glass jars and bottles for a few weeks in between our monthly visits to Metro.

However, from October 1st there are apparently going to be weekly collections from the street of other kinds of recycling. Our area will be Monday nights. These bags will be widely available. I don't know if they'll all be free, but this one was: 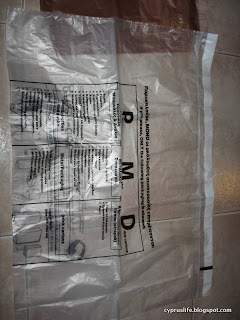 In that bag, labelled PMD, we can place plastic bottles of any kind, metal containers, and drink cartons. So, empty shampoo or dishwasher powder, empty cans of any kind, tetrapack juice cartons, milk containers of any kind. No margarine tubs, but those are the ones I use for freezing leftover meal portions anyway.

The other sack is for paper recycling: 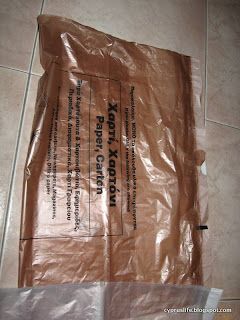 In that can go magazines, advertising leaflets, office paper, cardboard boxes... not toilet rolls or tissue paper, but just about anything else.

The booklet was full of exhortation to recycle, pointing out that it was of benefit to the consumer, and saying that there would be incentives to recycle in the future. I don't need any incentives. I've already started collecting things that can go in these sacks when the first collection takes place. I can't believe how happy it makes me that this is starting. I just hope it actually works as it's supposed to, and that people in Cyprus take it up as thoroughly as they do in the UK.

The only slight irony is the bag that the leaflet and larger bags were in, since it can't actually be recycled... 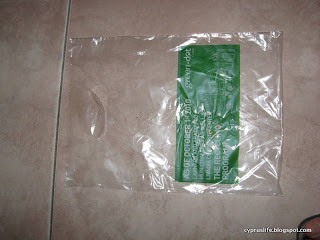 I suppose I can use it for cat-litter.

(General information about recycling in Cyprus can be found at the Green Dot Cyprus website)
Posted by Sue at 16:51

Yeah, Cyprus is trying to catch up with this, but they still have a long way to go!
They are "recycling" stuff in Limassol for some time now, but from what I know they still collect the garbage all together and sort it later in their facilities. Plus, I didn't see any paper bins YET which would be really useful considering the huge amount of paper leaflets they spam your mail boxes.
I really wonder if they do this because they care or just because EU is pushing them. I am still amazed to see that the plastic bags are still free in supermarkets!

Lucky you - you must live in the right place in Larnaca, because were we live (Tersefanou) we have yet to get that information in our mail box....

hello there, any news on this in larnaca, we have a place in souni (nr limassol) and find it hard to recycle like we are used to from britain and germany... the bags you photographed are available from the shops, and i use them to collect whilst on hols here, but i don't know wether to put them out next to the norrmal rubbish or take them somewhere, the only things we get rid of ourselves are tins ("cans4kids") and bottles...

Yes, recycling started as stated in the leaflet last October. Our collection night is Monday - so if I leave out bags with recyclable items, or cardboard boxes with paper, they are taken away. I'd suggest leaving the bag outside next to the regular rubbish and see what happens! They tend to be taken in evenings rather than mornings.