It happens around this time every year in Cyprus. The heating doesn't come on in the evenings, as the house is already warm enough. The days get longer, the sun shines with more regularity, and yellow weeds - often quite attractive weeds - appear in abundance on waste ground, like these ones pushing their way over the path on the Salt Lake trail: 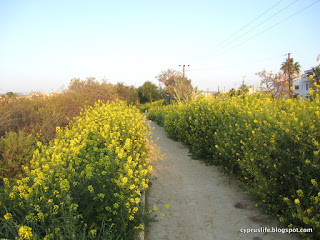 Citrus trees are fruiting too. The one thing I occasionally miss about our old house is the fruit that seemed so unusual to pick at first, then commonplace. But our local friends have a lemon tree that's prolific this year, and have been generous in passing bags of lemons to us. I asked if we could have a few earlier in the week, realising that Shrove Tuesday was coming up, and we Brits traditionally eat pancakes with lemon and sugar.  But I agreed that I could use more than a few... 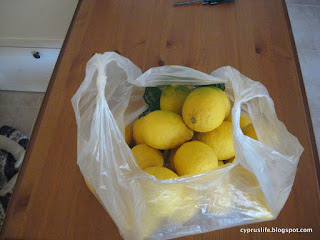 Easter is an important festival in the Christian Church, and also culturally in Cyprus where the majority of the population are Greek Orthodox, albeit in name only in many cases. In most years, there are two Easters, their dates calculated by different methods. But this year, as happens from time to time, both the Western and the Eastern Easter will be on the same Sunday in the middle of April.

That means that Lent - the forty-day run-up to Easter - should have started at the same time too, one would think. But that's not the case. In our Western tradition, the last day before Lent is Shrove Tuesday, although it's more often known as Pancake Day by the secular majority.  Traditionally one was supposed to use up products such as eggs and sugar prior to a simpler, vegetarian or sugar-free lifestyle during the days of Lent, in preparation for Easter.  Shrove Tuesday was four days ago, and yes, I made some pancake mixture, which Richard cooked after we had our evening meal: 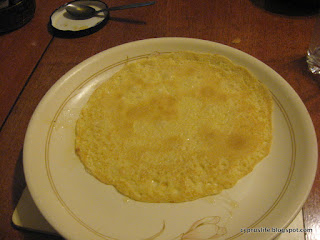 My recipe makes eight pancakes, which was fine when there were four of us living here, or indeed when there were three of us, as we could make them bigger or one of our number would eat more than two.  But this time we decided to put half the mixture in the fridge for the following day.

Back to the difference in Lent traditions, the Eastern church, at least in this country, begins five days before Shrove Tuesday, with 'Fat Thursday', or Tsiknopempti, as it's called here. It's the day when the faithful are supposed to use up all the meat in their household, with barbecues or feasts for the family; Lent as a fasting season was taken quite seriously until relatively recently.

When we first moved here, there wasn't much meat available during Lent, and we were told that we should be certain not to have barbecues or eat any kind of meat outside during the Eastern Lent period. Nowadays there's just as much meat available now as at any other time of year, and Cypriots openly cook and eat meat right through the Lenten period. There are some 'fasting' foods available: more vegan cheese than can normally be found, and a wide range of halva.  Tsiknopempti is celebrated by going out and buying more meat to feast on.

Friday, Saturday and Sunday last weekend were then the Carnival weekend in the Eastern tradition. There are floats and parades along the sea front, with children (and adults!) dressing up in costumes. The word 'Carnival' originally referred to the removal of meat, but that seems to have been forgotten. Carnival in Cyprus is safe and lively, not the dangerous brawls one sometimes hears about in other European countries, but it's too loud and crowded for me, and I keep away.

Monday was then 'Green Monday' (also known as Clean Monday, and the first day of Eastern Lent) which is a public holiday in Cyprus. It's roughly equivalent to the Western Ash Wednesday (the day after Shrove Tuesday) and in theory should be when people cast off sinful attitudes, forgive anyone they're harbouring grudges against, and ensure there are no tempting delicacies in the house.

In practice, at least in Cyprus,  many people spend the morning spring-cleaning their houses, then go out with their families and friends on a picnic, after which they fly kites.  Again, when we first moved here, we were told that on Green Monday we must make certain not to take any meat on a picnic as it would offend the Greek Orthodox.  Nowadays many Cypriots fire up their barbecues again with meat for their Green Monday picnics.

Back to our leftover pancake mixture.

On Wednesday, neither of us felt hungry after our evening meal, so the mixture remained in the fridge.

On Thursday, we decided to have our last pancakes after lunch. So Richard started cooking them...

.. and suddenly the handle sheared off the pan!  It's a heavy-based pan which I've used for omelettes regularly, and there was no hint that it was breaking. Happily the pancake was fine, but clearly, it wasn't possible to repair the pan safely: 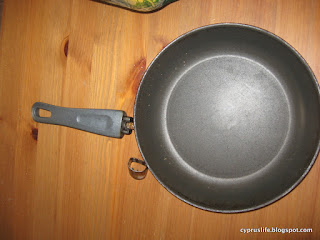 So he finished cooking the pancakes in a smaller frying pan, and they were very good.

I knew we had to go to a supermarket that afternoon, and was undecided between Metro and Lidl.... we hadn't been to either since before Christmas, as I do most shopping locally, but we needed various things that couldn't easily be found locally.

I looked through the Lidl advertising brochure that arrives weekly, and discovered that they had a special offer on heavy-based frying pans, in the size we needed.  So that determined which supermarket we would visit!  We weren't too keen on Lidl when it first appeared in Cyprus some years ago, as there is a very limited range of regular items, but we now know what's good value, and sometimes the special offers are extremely good.

So we went to Lidl, and now have a new 24cm frying pan: 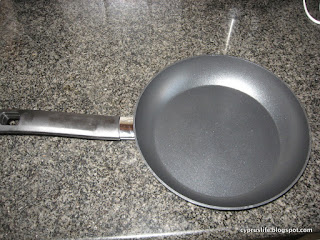 We used exactly one of our donated lemons with our pancakes. So this morning I processed the rest, freezing another litre with some peel for lemonade in the late summer or autumn when lemons are no longer available, and making more lemon cubes that can be used easily in drinks or food where a couple of tablespoons of lemon juice are called for.
Posted by Sue at 17:39

That first picture is absolutely beautiful. Weeds or otherwise it's still beautiful. Thanks for posting it. I'm so looking forward to my Cyprus move later this year.