Summer in Cyprus. Approaching yet again.

Once again, the inevitable is happening. A chillier-than-usual winter in Cyprus gave way to a pleasant spring. I very much like March and April here. The sun shines, but it's still cool overnight. I have the energy to get things done, and the landscape is green with a wide variety of wild flowers, and cultivated ones too for those who go to the trouble of growing them in their front gardens.

It's been a pleasant 20-23 C in the daytime for much of the past few weeks. Now, as April draws to a close, the predictions are for hotter weather ahead. Here's what the Weather Channel site is showing for the next couple of weeks: 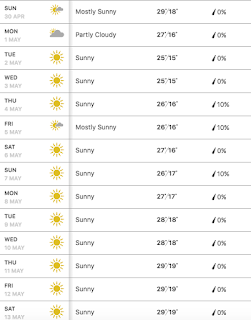 Yesterday, for the first time since about November, I spent most of the day without any sweatshirt or jacket of any kind. We went into town for various errands, and I found it was too hot in the sun, though still pleasant in the shade. Last night we ran our bedroom ceiling fan. It was only on the slowest speed, and we're still using a duvet... but the air felt still, and my face was too warm without the fan.

Today we realised that we haven't used our warm jackets for a week or two, and are unlikely to do so for the next few months. This is what our coat rack looked like: 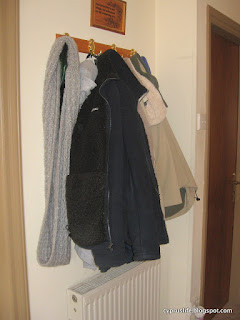 Two scarves, and about five warm fleeces and coats. I removed them all, and put most of the jackets in the washing machine.  A few hours on the line and they were dry, so they're now hung up in our landing closet upstairs. I took the opportunity to put more of my winter clothes there, and extract my shorts... which I expect I'll start wearing soon, if the forecasts are correct.

I found my sandals, too, looking rather grubby, so washed them as well, in preparation for needing them all too soon.

Then I collected our surprisingly large collection of sun hats and put them on the now empty coat rack: 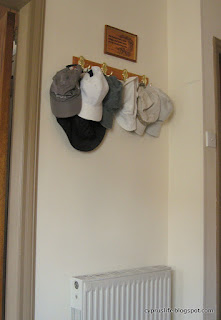 If Murphy's law holds, now I've made these preparations for Summer, we could be due for some unexpected and extra chilly weather meaning I need to get the jackets out again.  I won't mind in the least if that happens, but it's unlikely in May.

In the next few weeks I shall wash all our curtains, and we'll clean the air conditioners which we try to avoid using until at least June.  We'll switch to our very light-weight duvet, too, and then - probably only a couple of weeks later - just a duvet cover or flat sheet to cover us at night.

In other unexciting but typically Cyprus fashion, we went to Lidl just over a week ago. The shop has grown on us since our first unimpressed visit several years ago when it was new to the island.

This time,  I wanted to get some of their cat litter, which is about half the price of our usual brand and seems to work just as well. I also wanted a 2-litre bottle of olive oil, as our current one was running low, and theirs is usually the best value.  We didn't even look at the weekly brochure telling us what the special offers were, because we were only going in for these two items...

This is what we ended up with (plus two bags of cat litter) : 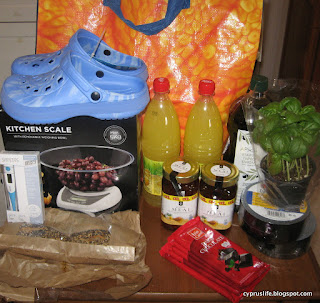 When we arrived, we remembered that our digital kitchen scales had recently gone faulty.  They were consistently weighing everything at about 75% of its correct weight, which was irritating and I didn't always think about the adjustment.  Happily, Lidl were offering good value kitchen scales with a bowl.

Then we saw a digital medical thermometer. I'd had what was probably a sinus infection the week before, and one day felt very shivery. We realised we had no thermometer, so no way of knowing if I was running a fever. Not that it mattered much, but at 2.99 euro it seemed like a good idea to have one.

Richard needed new crocs/clogs for casual use when sailing. We know the controversies about them, and that they're a bad idea for anything other than use on the beach or as slippers in the house, but he found just ONE pair in his size, in a colour he liked. So those were added to the basket. Along with our usual Lidl dark chocolate, and a new fresh basil plant, and a couple of jars of honey, and a couple or rolls of duct tape... and some seeded bread rolls for lunch.

A nicely eclectic mixture, not atypical for our Lidl visits. We still can't find most things we want there, and their fruit/veg are over-priced (in our view) but their special offers are often very good.
Posted by Sue at 19:54