It's almost four weeks since the family arrived in Cyprus after a few stressful weeks packing up the house and travelling, via relatives in the UK, to stay here. They were all exhausted when they got here, and it took a few days for the children to get into somewhat regular sleep patterns.

David, at three, no longer takes naps in the daytime, and Esther, at six months, just takes catnaps, and still usually wakes at least once in the night. She's teething, has just started solids, and has reached the stage of frustrating backwards crawling. She was very clingy with Becky when she arrived, too, and David quite stressed and anxious about all the changes.

I had already planned, before they arrived, to find as much time as possible to be with the children. I'm hardly doing any writing, or participating in forums, or doing anything with my websites while they're here. Emails are written in odd moments, and I've been uploading photos to Facebook every few days, but it's taken me over a week to find the time and energy to write this blog post.

With the increasing heat, we're all quite tired - other than David, who seems to have vast reserves of energy - and inevitably have to spend at least the hottest part of the days indoors. I'm delighted to discover that David has an almost endless capacity for books, so we're all reading aloud to him, everything from simple picture books through to early chapter books with line drawings, such as Mrs Pepperpot and Winnie-the-Pooh.

Still, we seem to have done a fair amount of other things - a few highlights below.

On one of the first days, Richard and I took David out to the local park where he enjoyed climbing and digging in the dirt as well as the standard slides and roundabouts. 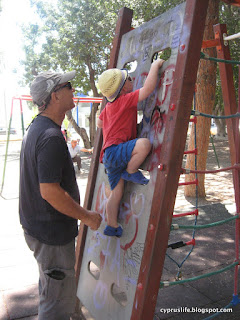 He's been to some Little Muse presentations and drama sessions (the last one before the summer break is today, giving me an hour to myself) and enjoyed doing some painting there: 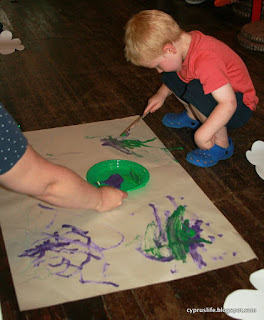 Great excitement ensued when he went sailing with his Daddy and Grandpa: 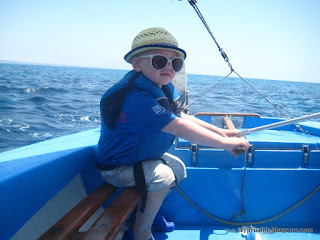 Richard has been very busy with work in the past few weeks, so there haven't been any more opportunities for sailing, but they hope to do that again soon.

We've been to the beach a couple of times, although it's so hot that we can't really go before about 4.30pm at the earliest: 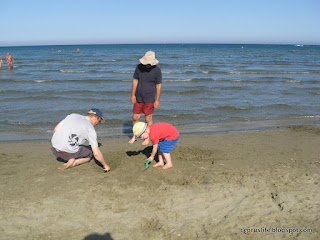 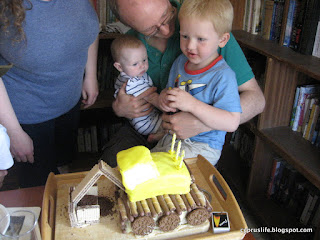 One of his birthday gifts was a paddling pool, which has provided a great deal of entertainment: 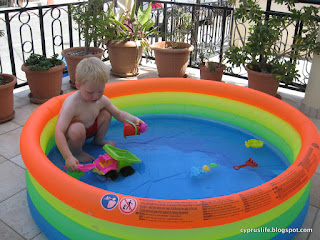 We found a second-hand bike at the thrift store, and a helmet, and he's ridden that in an area Richard cleared in our side yard, although, again, it's really too hot to ride much: 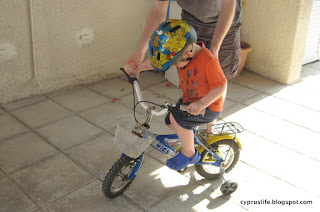 Another gift (bought with birthday money) was a sandpit, which he likes very much indeed: 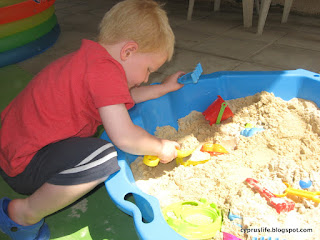 The shop where the sandpit was bought didn't have any play sand in stock, so after some research we discovered the Larnaka Early Learning Centre shop, which not only had sand, but let us know that on Tuesday afternoons they have play sessions for toddlers and young children, with plenty of toys and other activities available. So David's been to a couple of those: 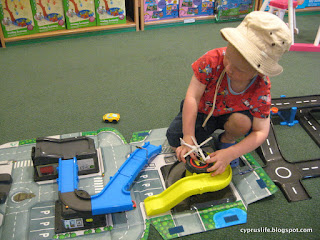 We haven't managed many board games; they're not possible in the daytime, for obvious reasons, and by the evenings we're often too tired to do anything. But we've had a few, sitting outside the guest flat, as it hasn't - yet - been too humid: 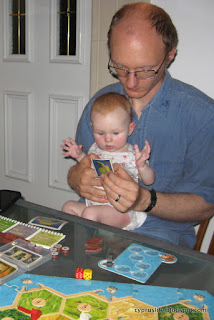 Daniel and Becky's closest friends came out to stay for a week, too, which was very enjoyable for them all, and they managed to play games most evenings.

David's enthusiasm and exuberance are quite tiring for those of us who are more introverted, but they also mean that almost anything can be fun for him. Even a trip to the supermarket became a great adventure when he was able to drive the trolley for us: 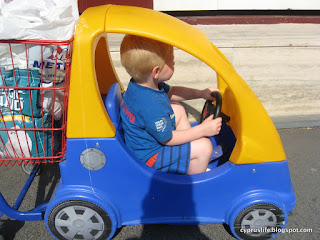 Esther, meanwhile, is quieter, and more placid. She's very taken with a set of plastic balls which we bought a few years ago, before David visited for the first time. She can sit by herself but topples over if she turns suddenly, so we made a mini ball pool for her, in a plastic box, and she was contented for quite some time: 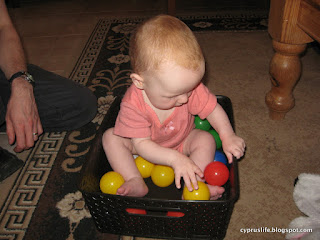 David is interested in building, mechanics and pipework, so Daniel bought some plumbing bits, and we've made various constructions for David to experiment with. One of his favourite activities is pouring water down a funnel, and seeing where it comes out: 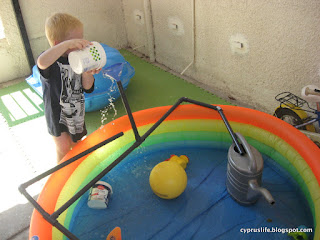 He can concentrate for a long time, adjusting the pieces and trying again when connections break, or when water comes out in unexpected places. I tried to explain that it would pour out of the lowest available gap in whatever system we built, and he seemed to understand. He exemplifies the concept of learning through play!

A local friend told us about a park that's much nicer than the two local ones; it took us a while to locate it, behind St George's Church, but finally we found an afternoon to take David there. Unfortunately it's not open all the time, and has almost no shade until the late afternoon... but still, it's a wonderful park and we hope to go there again: 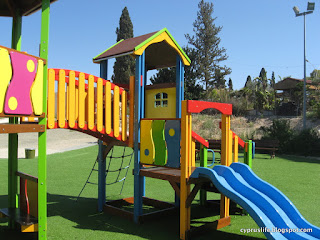 The family are here for another two months, and the weather is going to be hotter and much more humid, so we're going to look at the two recommended indoor play places that aren't too far away, and make the effort to go to the beach a bit more often.

We didn't move to Cyprus until our sons were nine and eleven, so we never had to find places to entertain very young children in the summer. By the time we moved, they were old enough to play outside safely by themselves (we had a huge garden in our rental house) and were also happy to sit inside during the hottest part of the day, reading books, or at the computer, or otherwise occupied with Lego or music or some other activity.

I am loving being an active grandma of a three-year-old, although I'm getting a lot more tired than I did when I was 27 years younger and had a three-year-old of my own.
Posted by Sue at 17:30

I think that it's wonderful that your grandchildren are able to spend 3 months with you, and am sure they will both enjoy the experience. The contrast between their personalities is fascinating as it raises the question of nurture vs nature; 2 children, close in age, raised in the same home yet apparently quite different in temperament. I hope that David doesn't exhaust you :)