Preparing for some important people to arrive in Cyprus

In the last few weeks we've been doing some extra preparations in our guest flat. We always make sure it's clean before anyone arrives, but we were expecting some very important (to us) people for the month of June: our older son, daughter-in-law and two grandchildren. A couple of weeks ago they heard that their expected plans had fallen through and they're actually going to stay in Cyprus for three months. We hope this will give them a good break, and time to relax after a very busy recent period.

Last Friday, we began by cleaning the guest flat air conditioners. They're not needed yet, but within the next few weeks the humidity will begin, and then they'll be essential overnight for refreshing sleep. We haven't done the ones in the main part of the house yet, but wanted the guest flat ones done before the family arrived.

Next we moved the desk/bookcase out of the front bedroom, so we could put up the cot for almost six-month-old Esther, next to the double bed. 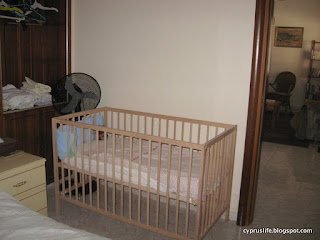 We vacuumed the living room rug thoroughly, and put on the sofa throw which had been packed away by previous guests, who used the sofa bed to sleep on. 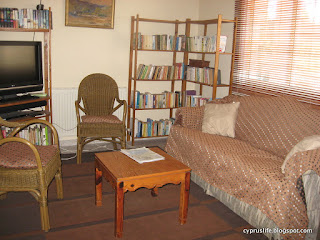 David, who is nearly three, will sleep in the other bedroom. I made up the bed with a Winnie-the-Pooh pillowcase (not shown) and a special extra visitor at the end of his bed: 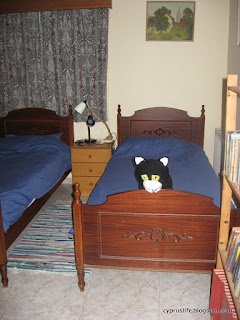 Jess the cat is a knitting project I started a couple of months ago, knowing how David loves Postman Pat. He turned out considerably larger than I had expected - here is he with Lady Jane, for comparison: 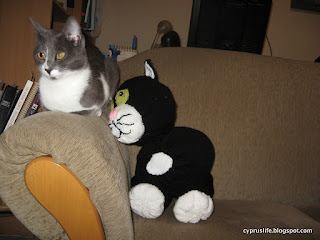 We remembered that, when they were here in the winter when David was a baby, there was too much light in the front bedroom in the mornings. In the summer, we realised, it would be much worse with the sun coming up early and streaming into the room. So we decided to instal a blind behind the curtains.

This proved to be a longer job than anticipated. We measured the windows and bought a 160cm wide blind at Mr Bricolage, a local DIY store, only to find that 160cm referred to the entire width, including fixings, and the blind itself was only 156cm wide. So we returned that and came away with a 180cm wide blind. Richard installed that under the curtain rail.... only to discover that the door (which is a very high one) would not open.

To his relief, the gap between the ends of the curtain rail had just enough room for the blind, so finally it was in place: 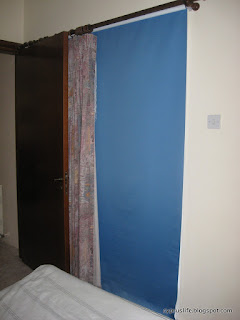 We had moved the cot out of the room, not wanting dust from the wall to fall on it, but still had to do considerable sweeping and mopping afterwards. However, it's well worth it, and the room now stays cooler and darker when the blind is down.

A week or two earlier, we started looking for car seats for David. Esther's is part of her pram/buggy, and we knew that was coming with the family, but they couldn't bring David's. We had the option to borrow one but it was quite old, and not necessarily up to modern safety standards. It didn't have a cover, either. Had they just been coming for a month, we might have opted for that, but with a three-month stay, we thought a new (or, at least, reasonably new) one would be a good idea.

There were none at the Thrift Store. We looked in Jumbo, and they didn't have anything suitable. We went to New Baby City, and were shocked at the prices of suitable seats. Of course one can't put a price on the safety of a child, but several hundred euros seemed extortionate, particularly when the same or similar seats were under fifty pounds on Amazon UK.  Unfortunately, Amazon won't deliver anything as big as a car seat to Cyprus.

However, we then went to Mothercare - similar the UK one - a shop we had always thought of as expensive. But they were selling car seats suitable for a child from two to twelve, exactly what we were looking for, at similar prices to Amazon.  Richard checked online reviews, and we eventually chose this one: 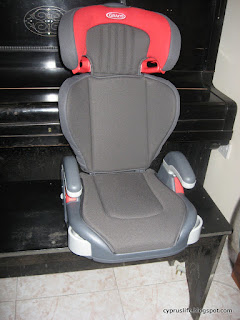 We also looked for a dining chair booster seat for David, since Esther will be using our high chair. We found one at Mothercare.... only to discover, on getting home, that it's only for children up to 12kg. So that had to be returned. They didn't have anything suitable for a child of around 20kg - so in the end we borrowed a car booster seat from our local friends, which works well: 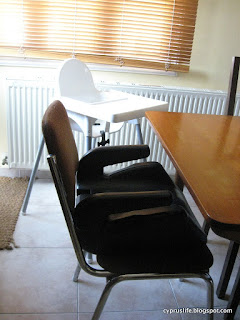 Richard bought some webbing straps to attach it to a chair, and since it's for older children it's quite sturdy.

We also bought a couple of baskets for toys to keep in the living room, and yesterday afternoon I found the things which we'd been storing since their last visit, and a few new items, and put them out: 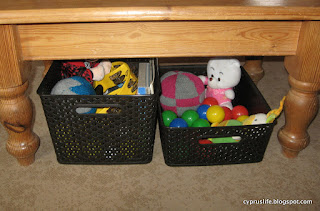 The family had been visiting relatives around the country before coming to Cyprus, and reported that David had been a bit feverish, and not eating. However, he was getting better by the time they flew, and their flight arrived in good time (fifteen minutes early, despite leaving late).

We both went to the airport, and our friend Sheila also arrived with a car to take the luggage - they brought three large suitcases as well as the buggy and lots of hand luggage - and also to take me back, as only five people can fit in our car.  She arrived at the airport just before the family came through the barrier, with all their luggage.

What could possibly go wrong...??

Sheila and I set off with the luggage in the back of the car, while the family went with Richard (who had parked in the car park) so we assumed we would arrive back home five or ten minutes before they did.

Unfortunately, about a third of the way back, her car ran out of petrol. It had been a busy day for Sheila, and somehow nobody had thought to fill up the car.... so, after coasting several hundred metres on petrol fumes, we drew to a halt.

She put on the flashing hazard lights and tried to call the roadside assistance company... only to discover that the insurance documents with policy details were not in the car, so she had no number or information.

Meanwhile cars were shooting along the dual carriageway, some of them much faster than they should have been, swerving to avoid the car, and, in many cases, hooting.  I suggested putting the bonnet up, even though we knew exactly what the problem was, so that passing cars would realise we'd broken down rather than just stopping to admire the view over the Salt Lake: 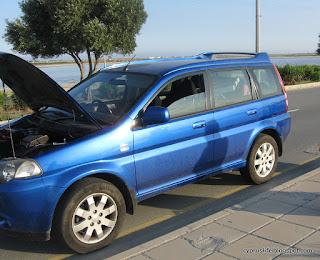 Sheila was able to phone her son Jacob who agreed to go and buy some petrol and a canister, and cycle out with it to the car. So we waited. 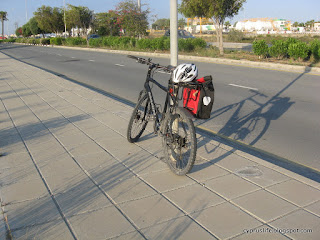 He put a few litres of petrol into the car....

...but it wouldn't start.  It appeared that the battery had gone flat after the lights had been on for so long.

We'd been in touch with Richard, of course, who by that time was home with the family. So he said he'd come back with our van, which is equipped with a tow-bar.

Fifteen minutes later he arrived, then he and Jacob spent some time trying to find a place to attach the rope to the car.  They eventually found a place that required a special kind of eye, which we didn't have. 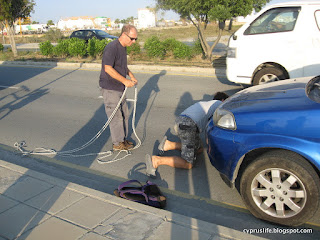 So after much discussion, we transferred the luggage to the van, and Richard took me and Sheila's youngest daughter (who had been in the car) back to our house, while Jacob cycled across town to buy the necessary gadget to enable the car to be towed. Richard had agreed to take Jacob in the van so they could tow the car back.

Sheila waited with the car.  Then a friendly stranger stopped and managed to use his jump leads to start the car again. She didn't want to stop at that stage to phone, in case the car stalled... so she drove straight home, and then phoned Richard. It was too late to stop him and Jacob travelling back in the van. But towing would have been a long and slow process, so they turned around and came home again.

We eventually ate our evening meal a little after 7.30, and Richard arrived back just in time.  So the whole frustrating experience had been under two hours.  Sheila said it's the first time in thirty years of driving that she's run out of petrol - and she hopes she won't do so again for at least another thirty years.

I had a choice of reactions - Interesting (yes), cool (I'm far too old to even consider using that word other than in reference to temperature), amusing (well it was to me, provided I knew it was all OK in the end, but I'm sure it was anything but amusing at the time), boring / too long (not at all). Alison