Since the family departed, I have taken very few photos. I've been scanning a lot of negatives from the 1960s and 1970s, both my own and some of my father's, and knitting, and proof-reading a book which my brother is writing. These don't take up my whole time, yet the days seem to move on increasingly fast. I suppose it's a sign of late middle age.

However, one photo I did take was of a Middle Eastern wedding, which took place on the beach where we were sitting with our friends, a couple of weeks ago. As we watched, hotel staff came and set up chairs and a table, guests started to arrive - the men in suits and ties, the women in dresses and high heels, which looked a bit awkward on the sand. After a while the bride and groom arrived, and the ceremony itself cannot have been more than ten minutes. People out on the beach watched with interest. Three of the children from our group went up quite close... 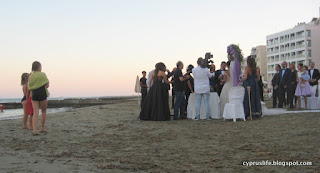 Today, I haven't spoken to another person (cats excluded). For an Introvert like me, that's actually a relaxing and energising way to spend a day. Richard went up to Nicosia yesterday, in preparation for providing PA for a day conference organised by some friends. So he's been out all day. Last night I decided I'd read in bed for a couple of hours, so went upstairs around eight o'clock, the cats having put themselves to bed already (we shut them into our dining room/kitchen area overnight so they don't wake us in the early hours!).

As ever, after about an hour my eyes started to droop, and I eventually turned out my light about 9.30pm and must have fallen asleep immediately. I woke shortly after 5.30am.  Normally, at this time of year, I would then go for a walk with my friend Sheila. But they're away at present, and I can rarely motivate myself to walk by myself, unless I'm doing some errands.

After feeding the cats, dealing with cat litter and reading for a while, I realised that I had forgotten to soak the dried fruit for a 'celebration cake' I was planning on baking this morning. I'm not being ultra organised for Christmas; this is an extra one which I promised some years ago to Richard, for his forthcoming special birthday. So I weighed the fruit, and put it in brandy, and put it aside.

I was also planning on making another batch of tomato ketchup today, and some more apple-and-tomato chutney. I had bought a 4kg bag of tomatoes at the local fruit stall a couple of days ago, for the grand price of a euro. They were still in good condition, but I needed to start using them.  So I chopped apples, and onions, and garlic, and tomatoes and started them both off in separate large pans.

I should perhaps also mention that in the middle I had mend my kitchen scales; they're very light, and have a tendency to stick to the bowl. I keep on forgetting, and I don't know how many times they have landed on the floor. I managed to break at least one set in the past by doing this, and our last set became unreliable, weighing incorrectly, after such a crash.  My current scales seem to be quite sturdy, and are still accurate... but today's crash made part of the insides come off and rattle around. I had to find a cross-point screwdriver and undo them to fix it - and was quite pleased with myself for succeeding.

I glanced at the time... and it was already eight o'clock. Time for breakfast, and a glance at my email and Facebook...

Then I washed up the utensils I'd been using; when I poured out the washing up water, a cockroach (shudder) ran out of the sink and behind the microwave. These are an ongoing problem in Cyprus in the summer; I've reached the stage where I no longer drop everything, scream, and leave the room. At least, not every time I see one. Instead I armed myself with Biokill and sprayed behind the microwave.  I turned around to stir the chutney, and turned back in time to see the roach running down the counter top and into a corner.

I didn't want to chase it around the kitchen spraying more potentially toxic insecticide, even if Biokill is milder than most. So I grabbed our large broom from the utility balcony, and swept the roach outside. I'm getting a lot braver.

Once the computer's on, it's easy to get distracted. There was an interesting discussion on one of the Facebook groups I'm on. I decided to start scanning some negatives... and kept going, finishing two or three films rather than just one. I answered a few questions on an online forum I participate in... and kept finding more that I could respond to.  I played moves in my Lexulous games. I checked my email. I briefly browsed the BBC news site.

In between doing those things, I kept popping to the kitchen to stir the chutney. I decided to move all the appliances on the worktops and clean behind them, but only did a couple at a time. I made our bed with clean sheets, as I do on Saturdays now, and I put on some laundry.

I usually clean the house on Saturdays too, and try to get that done before lunch-time, but my back was aching after all the chopping of vegetables, and I kept getting distracted by the computer. I followed links to interesting articles on Facebook. I went to Picasa, my photo-editing software, to check the results of the negatives I'd been scanning, and to add names to the faces.

Then I spent half an hour at Memrise - where I'm teaching myself some world geography, and Greek vocabulary - and DuoLingo, where I'm attempting to get better at modern Greek.  Not that I seem to make much progress in understanding other people speaking Greek - and almost everyone we know speaks excellent English anyway.

After lunch I dusted the whole house with my long-handled faux feather duster, including the ceiling fans, then turned them on as it was getting a bit humid. Summer is coming to an end, with the temperatures 'only' about 30C in the shade, at the most, so I was a bit surprised at the sticky feeling this afternoon.  I'm still using air conditioning in my study, as computers can't deal with anything over about 28C.

After another break at the computer (more photos, more forums, a Sudoku game) I swept the whole house, vacuumed the living room rug and dining room chairs, then mopped everywhere.  In between times, I sterilised six jars and transferred the newly-finished chutney to it.

Later, I labelled the chutney and put it away, next to the mango chutney I made at the end of August. I don't particularly enjoy making chutney, but I like eating it very much, so am always pleased to have a supply that should last us at least another six months or so.

When I'd finished the cleaning, I sat down at the computer again and caught up with some email.  And Facebook, and forums, and did a bit more photo organising...

By the time I'd had something to eat in the evening, I realised it was too late to make the cake, which might have to cook for three or four hours, so I'll do that tomorrow. I cleared up the kitchen, yet again, and put the dishwasher on. I am still, after eleven years in this house, very thankful indeed for my dishwasher.

I've been thinking for a few days that I needed to write a blog post, so although I was going to close my computer down an hour ago, I thought I'd 'just start' one. As ever, once I'd started, it was hard to stop...

The cats had a bit of a fracas this evening; Alex went out for a while, and then Jane started attacking him when he came in again. It's happened a couple of times before, usually when he's got into fights. I don't know what caused it this time, but I separated them for a while.  Happily, she soon got over it. And while I was in the middle of writing this blog post, Alex came and started nibbling my legs, a sign that he wants me to go to the kitchen with him. I did so, and as Jane came too - and was quite affectionate with him - I shut them in for the night. 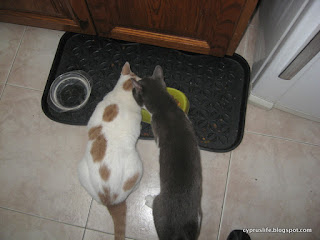 Oh, and if anyone's read this far, and is wondering where our grandchildren and their parents are... they are at last on the Logos Hope.  It's less than a month since they departed from Cyprus, though it feels like considerably longer. They spent a week in Canada with other relatives, then flew to the Dominican Republic. Yes, that country on a small island in the Caribbean, shared with Haiti, where two hurricanes have hit in the past couple of weeks. We were very anxious as Hurricane Irma approached, but they were in a large building with other new recruits on the south of the island, and - when they briefly managed to get online - we learned that the only effect for them was heavy rain. The ship and the crew had to go out to sea for a couple of days.

Our family and the other new recruits (around 100 people in all) have joined the ship now, according to its site updates, and again had to go a way out to sea when the port closed as Hurricane Maria drew new. They should be back by now, so we hope to hear from them soon.
Posted by Sue at 20:23

I was wondering about your family, having remembered where they were at this time. Thank God they are safe.

So glad your family is safe.