However, whereas many folk in the UK were probably unaware of Pentecost (or Whitsun, as it used to be called) a week ago, it would be hard to miss it here in Cyprus. Larnaka is traditionally thought to have been founded by one of Noah's grandsons, and Kataklysmos (a word which means 'deluge') is a celebration - if that's the right word - of the Flood, as well as of the coming of the Holy Spirit at Pentecost.

At least, that's the official line.  As with many of the religious festivals, it has become an excuse for a sea-front fair, which lasts nearly two weeks, as well as concerts, games, and much more to attract visitors and locals. It's not something that appeals to me, particularly. When our sons were younger we visited a couple of times, but the noise, heat and general chaos left me with a headache.

Twelve years ago we went out to eat with our house group on the Friday before Kataklysmos Sunday (back then, the festival did not open until the Friday, and lasted only one week). Even sitting in a restaurant, it was noisy, and I had no wish to go anywhere near it again.  Then last year we took some visiting friends for a walk along the sea-front a week before Pentecost, when there were some stalls but it wasn't yet total chaos.

This afternoon we went out for ice cream about 4.30pm, and then I suggested we could have a brief look at the stalls.  Although summer is here, it hasn't been as hot in the past week or so as it was, and by 5pm I was fine walking mostly in the shade.  I certainly didn't want to go in the evening, when it will be very busy and loud, but a couple of hours ago it wasn't too bad at all.

There were far more stalls than I remembered from the last time we visited. Some were set inside little tents with pointy roofs, extending much further than they did twenty years ago: 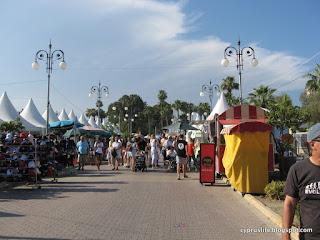 What always surprises us is that there are so many duplicate stalls. We saw at least three (maybe more) lengthy stalls, in the main part of the sea-front, selling traditional Cypriot sweets and nuts. 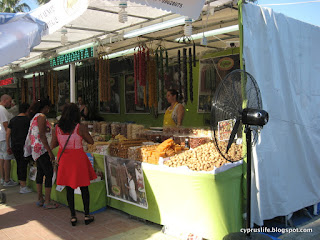 There was a huge trampoline for children, and a bouncing castle, and bunting everywhere - the atmosphere is a carnival one, and I doubt if many people thought about the origins of the festival. 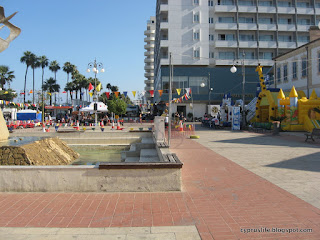 There are some stalls selling locally made jewellery and other crafts - we glanced at a few, but we didn't plan to buy anything. 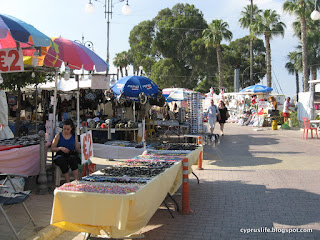 Toy stalls are another kind replicated so many times that I'm amazed they manage to sell anything.  I hope the quality is better than it was twenty or so years ago when our sons bought super-soakers at one of these stalls, only to have them break within a few days. 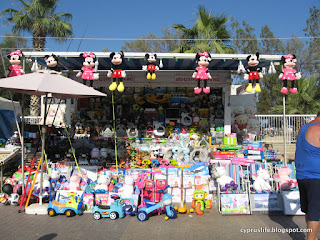 There was one book stall amongst the many others.  I didn't take a photo, but there were quite a few Greek hardback children's books.  Unfortunately this kind of fair doesn't have second-hand books, and those are the only stalls I ever really look at in fairs of this kind.

We had parked at the Marina (a fringe benefit of Richard having a boat there is that he can park there free any time he wants to) and walked almost as far as the fort.  It was half-past five, and the noise was increasing; there was going to be a concert later, and loud music was coming from some of the stalls, as well as from the concert area.

So we walked back on the other side of the road, in the shade, by the restaurants, and then came home.  Many locals and tourists will be down there this evening; some of the restaurants had extended out into the street with extra tables and chairs, hoping for extra customers later.  The noise will be unbearable (from my perspective) and the crowds claustrophobic.  But for those who enjoy crowds and loud music, the Kataklysmos fair is a highlight of the early Summer in Cyprus.
Posted by Sue at 19:55