Doing laundry in Cyprus, and the Eco-Egg

As a child, I was mostly unaware of how clothes were washed. I put things in the dirty linen basket, and at some point they appeared, clean, in my room. Or possibly in the airing cupboard. I did know that my mother put things in the washing machine, but took little notice of the process.

When we visited my grandparents in Scotland in the summer, one of our special treats was helping my grandmother with her weekly laundry: she had an elderly twin-tub machine, where we had to use something like a rounders bat to lift clothes from one section into the other, and then a hose to put rinsing water in. She could never understand why we found it so enjoyable to help; I'm sure if we'd had to do it every week, it would quickly have lost its appeal.

But I never had any conception of what detergent was used. I'm not sure I knew what detergent was, other than some magical substance that cleaned clothes. As a teenager I vaguely remember adverts, telling us this powder would wash whiter, or brighter, or remove the worst stains... but as far as I could tell, they were all much of a muchness.

I was newly married and had to choose a laundry detergent from among the large number available. We probably chose the one that was best value, or that was on special offer.  Richard wanted me to use fabric conditioner, something that was new to me, but when I did so, my clothes became unbearably itchy. Strange, because they felt softer, but evidently I reacted against something in the conditioner.

When our first son was born, his skin was very sensitive. So after a few false starts - and a lot of nappy rash -  I started using a detergent advertised as gentle on a baby's skin.  I learned that the 'biological' powders, excellent on difficult stains (like blood or ketchup) were not at all kind to sensitive skins. So I would carefully select the non-bio powders, or liquids, and (occasionally) soak a difficult stain first in a stronger solution.

My sons were older, their skins less sensitive, and I was less obsessive about finding non-bio detergent. So when we moved to Cyprus, more than two decades ago, I bought detergent in a brand I recognised.  I always used less than the recommended amount, and as far as I recall we didn't have any problems.

But in the last few years, I gradually became aware of two things. Firstly, that standard detergents are not good for the environment, and not particularly good for clothes. Secondly, that I was feeling itchy in a low-key way rather more often than I liked, and - in the winter - developed a rash in places where my skin rubbed against my clothes. Not bad enough to worry me, but a minor irritation now and again.

I l switched to a different washing powder, but that didn't help.  I looked for non-bio washing powder in three different shops, but could not find any.  I started using less and less detergent.  That probably helped the environmental problem slightly, but made no difference to the itching and rashes.

Then - yes, I have finally reached the point of this post - just over a month ago, we were in the UK for a few days. The main reason was my nephew's wedding, a wonderful occasion (and thankfully the weather was considerably milder than it might have been). In our extra days, we did some shopping, including going to one of my absolute favourite shops, Lakeland.

And there, I saw - on a promotional stand - the 'eco-egg'.  I had heard of these alternatives to detergents many years ago, but reviews had been mixed and I had been cynical. But these eggs come with special little pellets or granules. Apparently they produce a couple of chemical reactions that cause dirt to be removed from clothes gently and washed away without the need for detergents. They were advertised as ecologically sound. When I asked the assistant if they worked, she said they had sold a lot and nobody, so far, had complained or returned one .

The box said that the eco-egg was good for up to 70 washes. It cost £9.99 so was not much more expensive than the equivalent bag of detergent in Cyprus. Refill packs for the eco-egg are available at half that price for up to 50 washes, so I decided I had little to lose.  At worst it would do nothing more than washing with water alone.

I have to admit to a minor annoyance when I opened the box, hoping I could squash the contents into my over-full case.  The egg was much smaller than I had expected: the packaging was excessive: 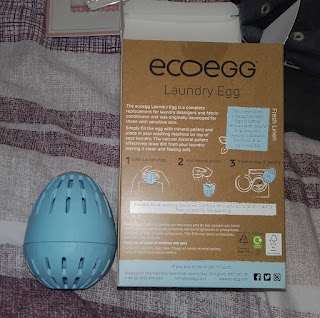 But at least it was cardboard, and thus easily recyclable. And there was no problem fitting the egg into our luggage!

I have used it, now, for four weeks.  In that time, I suppose I've done about fifteen loads of laundry.  I've followed the instructions carefully: I don't over-fill the machine, as there needs to be room for the egg to move around. I make sure it has a chance to dry out in between loads.  And the one time I had a 'difficult' stain, I first soaked the item in a little regular detergent, then rinsed it, then put it in a load with the eco-egg.

I don't always separate light from dark clothes; I prefer to separate different kinds of washing, doing one load a week of towels and tea-towels (60 degrees), one of socks, underwear and some other darker clothes (40 degrees), and one of sweaters, lightly-used shirts etc (30 degrees).

Is the eco-egg better for the environment than normal detergent? I don't think there's any doubt about that one. It has to be better.

Is it better for my skin?  Yes!  Within days I became aware that I was no longer feeling itchy.  And at moments when I suddenly felt an itch again, I realised a moment later that I was wearing something that had not yet been washed by the eco-egg.  The rash has almost entirely vanished.

Does it actually DO anything?  I have to admit, this is much more difficult to evaluate.  Would I have exactly the same results if I simply washed the clothes with water and nothing else?  There is no real way to test this. I would need two identical machines, and two identical loads of dirty clothes to be able to perform a fair trial. But as far as I can tell, yes, it does do something.  The clothes emerge from the machine smelling fresh and clean.  That's not necessarily the case when washing with water alone.

The smell isn't the artificially fresh one that comes with detergents. It's far more subtle. By the time the clothes have dried on the line, the scent of the clothes is more of outdoors than anything else. But I'm pretty sure my load of socks and manky jeans would still smell a bit stale if I had only washed them in water.  Perhaps clothes washed with the egg would be stale, too, if I left them, damp, in the machine. But I usually hang everything out within minutes of the load ending; no more than half an hour later.

The clothes are undoubtedly softer than they used to be, which is probably because there's no build-up of detergent in them.  The only slight disadvantage - if it is one - is that the whites are not quite as brilliantly white as they used to be. Sunshine helps, although we haven't had a whole lot of that in the past month.  But I don't think it actually matters too much.  Besides, if detergent was whitening our whites, what was it doing to clothes that were not white...?

And if you were wondering how it works...

The product description at the Lakeland site states,


The two types of unique powerful cleaning pellet activate in water, working together to produce a powerful foam that gets right into the fibres of your clothing to lift off dirt and grime with ease. Here’s the science bit – the ceramic pellets weaken the adhesion between the dirt and fibres, while the mineral pellets naturally ionise the oxygen molecules in the water, which then penetrate deep into fabrics to lift dirt away without fading colours or damaging your clothes.

I don't know if that is scientifically sound, but then I never really understood how traditional detergents work. I can't say I've noticed much 'foam' in my eco-egg washes, though sometimes I see a small amount.

Maybe I'm gullible and the eco-egg doesn't actually do anything other than bounce around inside my washing machine.  But, so far, I'm pleased with it.  I haven't seen anything like this in Cyprus, but with increasing environmental awareness, perhaps they will start to appear.

In the meantime, I'll buy refills from Lakeland.
Posted by Sue at 16:00