The ground floor of our house is a separate flat - it was the house that was originally built on our plot, before the owners extended upwards. Since we moved here in 2006 we have considered it our 'guest flat' - and over the years it's been quite widely used. We've had relatives staying, and friends, and friends of friends... we've also had people connected with Richard's work, and other random people, needing a place to stay. The only criteria is that if we don't know them, we know someone who can vouch for them.

We don't run it commercially - it's not an AirBnB or anything like that - it's part of our home. When it's not occupied by guests it sometimes gets used for construction work, or things related to Richard's boat. Some years it's quite busy, other years less so.  And, of course, last year there were virtually no visitors at all. We did have someone who stayed a few nights over the 2020 New Year, but then she was able to go somewhere else that was more convenient. Visitors due to come in the spring - and the autumn - had to cancel as the world went into lockdown.

In September last year, we did host the son of friends who flew back from another country and had to self-isolate for a week or so, and a few weeks later hosted a young woman who was here for a few days working with the refugees. But I don't think either of them did any cooking - one had food provided by his family, the other was out and about.  We did a quick vacuum and mop before both these people arrived, of course, and ensured the bedding and towels were clean. But it was a long time since we did any serious cleaning - there didn't seem to be much point, as nobody has stayed there since October 2020.

At the start of June this year, we hosted our first barbecue of the season for our closest friends. I realised as I took lids off salads that I hadn't brought down sufficient serving spoons, so I popped into the guest flat and grabbed a couple out of the drawer. And was shocked at the mustiness. I washed them, of course, and afterwards they went through our dishwasher. But I made a mental note that before we had any guests in the flat, we would need to go through all the drawers and cupboards, and wash all the cutlery and crockery.

For about six months the second bedroom in the guest flat was full of boxes belonging to some other friends who have moved to a different country.  And although we've had a lot of people provisionally booking to come and stay in the Autumn, there wasn't anyone due to come before then. But I felt the urge to get started with the cleaning and sorting while the weather wasn't quite as hot as it was likely to be in July and August. So when I stopped walking with Sheila towards the end of June - as it was starting to get hot - I decided to spend an hour or so each day, first thing, doing some sorting in the guest flat. Richard was able to move the boxes, and also took away the last of his tools and sailing bits and pieces... and I began.

I started with the main/front bedroom, as that seemed like the easiest. I washed the curtains and cleaned the windows, and the radiator (which was full of dust). We cleaned the air conditioner, and I washed the mattress cover and pillowcases that were out, and dusted and mopped.  That took a couple of days, but it was quite satisfying when it was done: 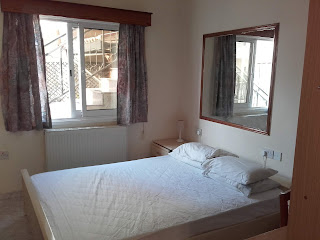 Each day I did another load in the guest flat washing machine - other curtains, bedding, musty towels and tea-towels - but there's not a lot of hanging space outside, so I limited it to one load per day.  I did a load of washing up too - all the mugs, and then the cutlery, and then started on the pots and pans and other containers, leaving each load to dry before I embarked on the next.
And then I tackled the games cupboard - possibly not a priority for most of our likely guests, but it was beginning to smell more than musty. I'm not sure if the dampness on the bottom was due to a leak somewhere, or just the excessive humidity. But however it happened, some of the jigsaws at the bottom - old ones, mostly - and one or two of the games were beyond any hope of repair.  We have all our favourite games upstairs, so it wasn't a huge loss.
Having got rid of the worst,  I washed everything that was plastic, sat musty boxes out in the sunshine, and realised that we really didn't need half a dozen different sets of chess pieces, or games with half the tokens missing. I found somewhere else to put the jigsaws and decided to limit the games to the top shelf of the cupboard only, at least until we discover the source of the dampness. The damp patch is rather obvious in this photo - I took this after thorough cleaning of the cupboard as well as sorting, cleaning and rationalising the games: 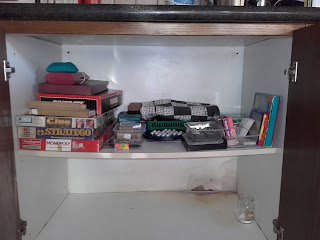 Friends had asked if we could host some of their friends for ten days or so in the middle of July, so suddenly there was a motivation to get the flat finished - and I was beginning to feel more and more overwhelmed. By the end of June, I was realising that just an hour a day was not going to get everything done, so we both spent more time sorting. I was glad it wasn't just me, as it turned out that some of the pots and pans were also past redemption - and there were so many of them, some broken, some mouldy.  We took everything out and began the task of sorting out and cleaning what looked as if it might be useful: 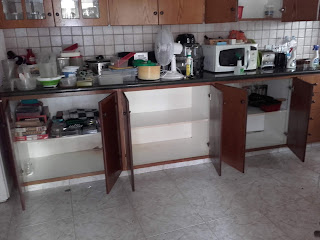 Given that most of our visitors stay only a week or two, and are out and about - or, if they're family or close friends, eating with us - it's really not necessary to have a vast amount of kitchen equipment in the flat. Particularly things that are broken, or can't be properly cleaned. We've tended to put things there when we run out of space upstairs, or invest in something new. And some visitors have left things behind for the flat - so we were fairly ruthless about getting rid of any rubbish, or anything that clearly hasn't been used in a decade or more.
So the air conditioners were cleaned, and everywhere was dusted, and everything washable had been washed... but it still smelled a bit musty, though considerably better than it had done. And some of the drawers and cupboards (such as the bottom of the games cupboard) looked rather unsavoury, despite having been thoroughly cleaned.
So we bought some inexpensive drawer-lining stuff, in white, and on the first Saturday of July determined to finish - if at all possible. We bought a small dehumidifying device for the games cupboard, too.
The drawer lining made a huge difference to - for instance - the under-sink cupboard, which had been plagued with leaks for years until Richard replaced all the plumbing earlier in the year: 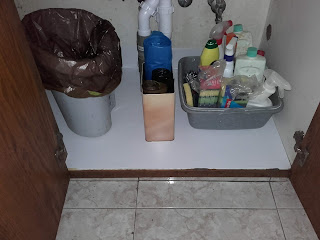 However, although we spent about three hours in the flat that morning, and achieved a considerable amount, it still wasn't completely tidy. And we were exhausted. By that stage the people due to come in the middle of July had cancelled, and although we'd had a query about early August, we knew those guests weren't likely to make it. And there didn't seem much point doing final mopping and vacuuming - or sorting the last few bits and pieces - if we weren't having any guests until the middle of September.
Then we had a query about the whole of August, from a family who have been before. As the flat was available we were able to say 'yes'.  And then, last Thursday, a young friend called to ask if by any chance a friend of his could stay, as her brother had tested positive for Covid, and she was told that if she wanted to continue working, she had to be away from him.
So on Thursday afternoon, we did the final cleaning and tidying. I put the washed sofa throw and cushion covers back in the living room: 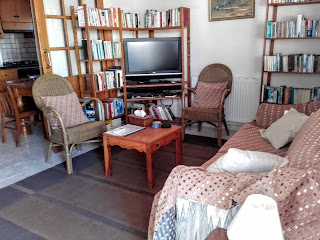 I put sheets and a duvet cover on the bed, and got out a fan: 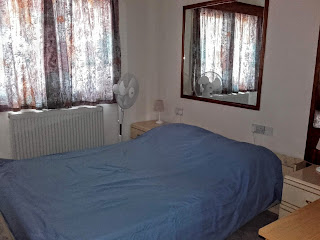 Richard got rid of the last of the rubbish, and vacuumed, and swept, and I mopped: 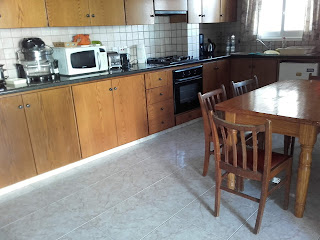 And suddenly it looked like a habitable guest flat again, ready for visitors.
Posted by Sue at 21:05

Gosh Sue!!!! I am incredibly impressed by your dedication. I honestly do not think I could handle the amount of work you do. Take care and may God bless you.