One of the things we like in Cyprus is the Greek yogurt, which is widely available and not too expensive. It comes in tubs like this: 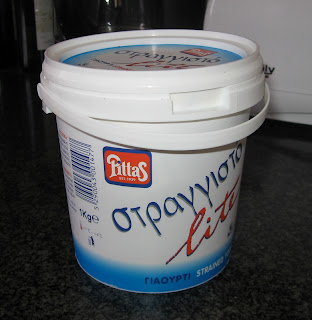 Yes, that's a litre of thick (set) Greek yogurt. It's the live, low-fat version which doesn't taste particularly different from other non-live and high-fat versions. We buy it by the litre since we get through about that much in a week. I use a good scoop on muesli at breakfast-time, the cats like a spoonful or two each day on a saucer, and we use it as a topping on desserts, on the rare occasions when we have desserts.

Unlike the flimsy little pots that small, fruity yogurt comes in (and here they're almost all horrible artificially sweetened non-live ones, so we don't buy those) the Greek yogurt tubs are quite sturdy. Re-cycling simply doesn't happen in Cyprus, but we certainly re-use these tubs. So far we've used them - or seen them used - for:

In our house, though, they have another very important function. During the summer, if you wandered around our house during the morning, you might well see something like this: 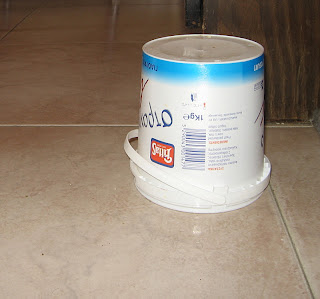 - a Greek yogurt pot, upside down on the floor. I keep a supply of empty ones on the fridge, and - during the summer - at least one in the bathroom.

Well, one of the not-so-good things about Cyprus is the (shudder) cockroaches. Ten years ago, I couldn't bring myself to say or even type the word. But they're a fact of life here. During the summer months - mid-May till mid-October - they come out of the septic tanks and drains where they live, and crawl around outside. Or up drains into sinks. Or, if they're at the ends of their lives, they fly.

So when I get up in the morning, at this time of year, I go very cautiously, keeping my eyes peeled in case of finding a cockroach. Usually it's upside down and dead - the cats are handy here, as they don't like any intruders running around. Besides that, once they start flying - and they have to fly to get to our bathroom window - they're pretty much at their last stages anyway.

Even so, they make me shudder. I can't bear to look at them. So I grab an empty yogurt put, and shove it down over the top of any roaches lying around. And there they stay, until Richard sees them, and disposes of them.

So if you happen to be in our house during the summer, and see an empty yogurt pot lying on the floor... just leave it. Unless of course you're happy to dispose of what you might find underneath.
Posted by Sue at 14:27

Hmmmm, this makes me feel a lot better about my seasonal ant problem...

My sister is a animal lover extraordinaire and won't even kill an ant. When we first took her to Cyprus she encountered what turned out to be one of these huge cockroaches on the bathroom wall. As my husband's shoe was poised over it -she pleaded with him not to kill it .............until it flew at her and onto and almost down her cleavage !!
Cristol

This is four years after the fact, but the cockroachers are still here. We have pet-sized cockroaches, and we have no compunction about hitting them over the head with a shoe.

But it looks like we're going to need a bigger shoe. (Sorry, Jaws.)