In our favourite Froutaria, mentioned regularly in this blog, there are two kinds of discounted fruit and vegetables. Firstly there is the 'pink bag' aisle, with various produce, a little older than that in the main part of the shop, at a discount. I usually look there before buying anything else.

But there's also a large shelf with pre-bagged fruit or veg, usually about 2kg, for one euro per bag. Occasionally I've bought oranges there, sometimes grapes, once or twice pears or french beans. I never know what to expect: it could be fruit in high season, which is excess to requirements, or it could be older produce which won't last another day. However it usually looks good quality - discarding three or four grapes when they're so cheap is hardly a problem.

Recently, I've thought about using these one-euro bags more effectively. Once the weather gets cooler - I hope this will happen, although the last couple of days have seen 32-34C once more, and high humidity overnight still - I plan to walk to the Froutaria at least three times each week, sometimes four. I also plan to buy one or two of the pre-bagged produce every time, if there's anything at all that looks useable. I may make jam, or chutney, or blanch and freeze vegetables, or try out some new dish.

On Tuesday I spotted that the Froutaria had bags of small apples in the one-euro aisle. I picked one of them up. I couldn't see any bruises or mould; the apples didn't even feel soft. I regularly buy apples anyway, and while we wouldn't use that quantity for eating and juicing, I thought perhaps I could make some apple sauce. One of my favourite easy bar cakes is chocolate chip applesauce cake; I haven't made it for a long time, because jarred applesauce is pretty expensive in Cyprus, and I don't usually have sufficient apples to make my own before baking a cake (which is usually at the last moment anyway).

So I bought a one-euro bag of apples. When I got home, I tipped them into my large fruit bowl immediately, checking as I did for any bad patches. 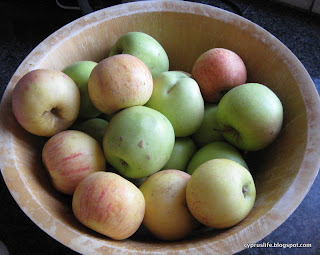 I didn't find any problems at all. I tried one of the yellow apples, and it wasn't at all soft, but quite refreshing.

Yesterday I weighed the remaining apples. There were about 2.2kg (which is around 5lb, for anyone who thinks in imperial units). I picked out three of the nicest-looking apples for eating, and decided to make the rest into apple sauce. There were sixteen of them; they really were rather small.

My method for doing this is very simple. I had a couple of elderly lemons in the fridge, so I juiced those with my citrus juicer (after warming them for ten seconds in the microwave to ensure maximum juice).

Then I put half the juice at the bottom of the blender. It's a one-litre blender, so I thought I would probably need to make two batches. From past experience I knew there was no point putting all the apples in at once. So I peeled a couple of the yellow apples, cut out the cores, cut them into chunks, dropped them in the blender, and whizzed. They turned into purée satisfyingly quickly. I did a couple of the harder, green apples, and it took a bit longer but still worked well.

I hated to waste the peel, but couldn't eat it all, so for the next apple I simply washed and cored it, leaving the peel on. That, too, blended easily into the purée.

I had to use my spatula to ease some of the apple sauce from the sides of the blender, where it was getting a bit spattered. Despite the lemon juice, it started going a light brown colour: 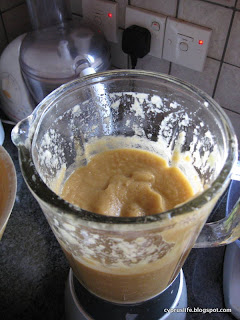 - but it tasted very good. I continued until I had done the first eight apples, and the blender was showing that I'd made about 800ml. Then I decanted into three small margarine tubs (250ml/1 cup size): 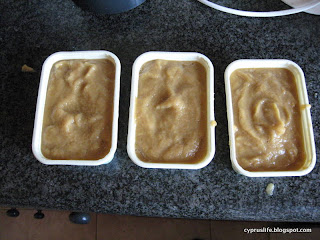 I labelled them and put them straight in the freezer.

Then repeated with the other eight apples, but didn't bother to peel any of them.

Result: nutritious raw apple sauce, to be used in cakes, or on cereal, or for any other reason; about 1.5kg in all, for a cost of about a euro (including the two lemons, and the minimal electricity used by the blender). Orange juice could have been used instead of lemon juice - I've done that before, sometimes; probably even water could be used, since the main purpose of the juice is to give enough liquid to get the blender started. Fresh citrus juice does slightly delay the oxidation/browning.