The sad demise of our juice extractor

Our dishwasher seems to have been running considerably hotter than it ought to, in the last couple of weeks. It's not a huge problem - it just means that I have to switch it off after it's finished, and then leave it to cool down for at least a couple of hours before unloading. I'm not sure if it's the washing or the drying that's over-hot, but everything in it is coming out sparkling clean. Richard plans to talk to our friendly repairman at some point... when he has a moment. And since it's working, it's not a huge disaster. Glasses are not cracking, the empty margarine containers I use for freezing portions of food are not melting...

..indeed, all was well until I decided that the bowl part of our juice extractor could do with a wash in the dishwasher. Not, I'm happy to say, our citrus juicer, but the centrifugal one for apples and other non-citrus fruit. We have fresh fruit juice every morning, and I usually alternate oranges and apples, with other seasonal fruit added as relevant.

Alas, when I came to remove the items from the dishwasher, this is what I found: 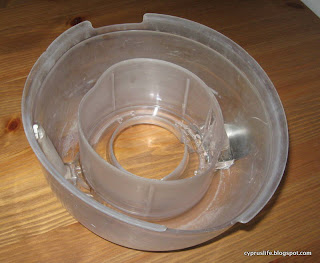 It's hard to do it justice with a photo. It has become distorted; and as it's hard plastic, it won't bend back. There's no way it will fit into the machine: 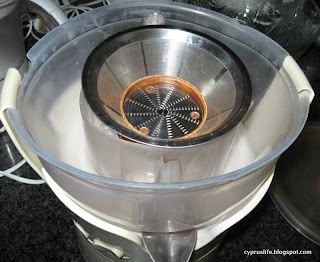 Getting small appliances repaired in Cyprus is both difficult and expensive, and not generally worth it. I don't remember exactly when we bought this juice extractor, but it must have been about four years ago. Still, I've found a very useful site in the UK which supplies spare parts for just about anything. So on Sunday, I got in touch with them - the site is Belstar Electrics. I couldn't find any trace of this juicer (a Tefal Elea) but they had a contact form, so I used it.

A few hours later, I had a friendly reply saying that they were sorry, but they didn't have anything for this machine.

So I tried Tefal's own recommended site for spare parts, Britcom. I couldn't find the juice extractor listed there either, but they also had a contact form. So I got in touch.

Today I had a reply saying, 'I'm sorry, but this product and its parts are now obsolete'.

Probably it was obsolete when we bought it. That does, sometimes, seem to be the case in Cyprus; items no longer available in the UK or mainland Europe can still be bought here. It's a good machine, so I don't know why they would have withdrawn it; we haven't had any problems with it, and it must have run at least three times per week for four years, which is quite a bit of juicing.

Yesterday I remembered, suddenly, that our food processor has a juice extractor attachment. This morning I hunted in several likely cupboards before finally running it to earth. Rather dusty, so I washed it and will see how well it works. If it manages apples successfully, then I may simply use that, which is simpler (and considerably cheaper) than having a new juice extractor.
Posted by Sue at 20:02