The Peculiarities of Plumbing in Cyprus

One of the comments made, now and then, by friends or relatives visiting us in Cyprus is that the skyline is somewhat spoiled by all the water tanks and solar heating panels.  We've got used to them ourselves, after nearly twenty years living on the island, but they do have a point. This, for instance, is typical:

(If the image seems too small, clicking it should lead to a bigger, clearer view).

Whereas in cooler countries, hot water tanks are usually indoors, and insulated with warm lagged jackets, in Cyprus they are outside, on the roof, and (so long as the sun is shining) water is heated by the large solar panels.

Cold water tanks seem very old fashioned to many who don't live in Cyprus, but for many years there was a severe drought on the island. When we moved here, mains water was only switched on a couple of times per week. So it was vital to have cold water storage tanks for use in between times.

Most kitchen taps are still equipped with both mains and tank water availability, with the mains (sometimes filtered) for drinking, and the tank water, hot and cold, for washing dishes. Our dishwasher and washing machine run from the tank, as made sense during the drought years. Nowadays, with recent rainy years and the functioning desalination plants, water is on almost all the time, and some people now have their machines attached directly to the mains water inlets.

Since our house is in two parts, with a separate flat underneath the main part where we live (fairly typical in Cyprus) we have four tanks in all.  The hot ones, fed from the larger cold ones above them, are heated by the solar panels. 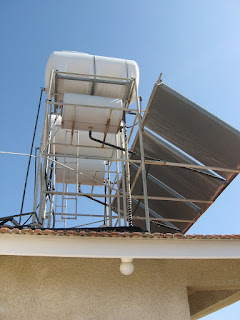 The trouble with tanks being on the roof is that, despite being strong and long-lasting, they are at the mercy of the elements. The sun is very hot in summer, and in recent years the winds have been extremely strong at times in the winter.

Seven-and-a-half years ago, we had to have the guest flat cold water tank (the one nearest the edge) replaced, due to a serious leak in the side. We had the pump fixed too, and various other repairs, and everything worked nicely. It was a little frustrating that the hot water never seemed to stay hot for more than an hour or two in the evening, after the sun had gone down, and Richard muttered now and again about having some extra insulation. But we have an electric water heater to supplement the solar power, so we used that when we needed hot water in the evening, or before it had warmed up sufficiently in the morning.

Now and again we noticed that drips were starting again, and we called in plumbers - I think we've used three different ones now, maybe more - who repaired problems in pipes, or outlets, or, on occasion, the ballcocks that are supposed to regulate when the tank stops filling up.  The latter seems to be a common problem; one of our neighbours has a tank that overflows for short periods regularly, as can be seen by the marks down the side of the top tank: 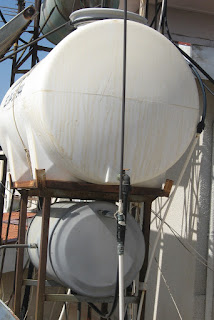 Last year we realised that we were seeing were yet more drips, and they weren't just sporadic. We looked at them, and sighed, and said something had to be done. But it didn't seem like a huge problem and we didn't get around to it.

Then one day towards the end of the year, we had water not just dripping onto the balcony below the tanks, but pouring down. We called our friendly local plumber, who came pretty quickly and said that there were two issues. The guest flat hot water tank had developed a serious leak in one of the seams, and was spewing water out. That one was fairly easily fixed, which is good because some of the water was also leaking inside our roof and dripping through the bathroom ceiling.

However, the other hot water tank had a hole that couldn't be fixed, and needed to be replaced completely. But we couldn't have a tank off the shelf; it's pressurised and had to be built specially. So the plumber put in an order, and hoped it would be ready to install before Christmas.

Unsurprisingly, that didn't happen and we were in the UK with the family by the time Richard had a text message to say that the tank was ready.  By the time we were back in Cyprus, the plumber had too many other jobs, then Richard went away again.  Finally a date was arranged, only to discover that the company who had built the new tank had given up waiting for it to be claimed, and sold it to someone else.

But finally, a couple of weeks ago, the plumber arrived with a couple of other guys and the new tank. It took them a couple of hours to put it in place, and everything looked good. There was some slight confusion in that it looked, from the wiring, as if it was the guest flat tank and not the main house one... apparently both the wiring and the pipework are 'interesting'. As is not atypical in this country.

However, there were no more leaks for the rest of the day, and to our delight, the new tank is much better insulated than the old one was, meaning that the water is still hot enough for a shower even four hours after the sun has gone down on a chilly day.  It wasn't cheap having this new tank, but over a few years we should save quite a bit on our electricity bill.

The night after the new tank was installed, I thought I heard a drip, and saw a bit of a puddle on the balcony after dark. But it had been a cloudy day, and I thought perhaps it had rained. The following morning the balcony was dry, and there were no more drips for nearly a week.

However, we had people staying in our guest flat for that week. The day after they departed, there were more drips, which - as far we could tell - were coming out of the guest flat cold water tank, or possibly one of the pipes nearby.  Puddles were appearing yet again on the balcony: 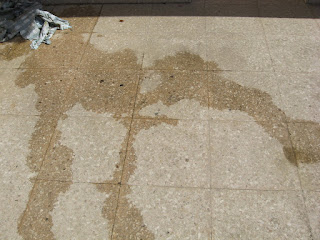 I thought I could temporarily stop the drips by switching off the guest flat mains water, thinking it might be an overflow problem. So I did that... but it made no difference.

So Richard called the plumber, who came to take a look. He said it was an overflow problem, and the ballcock wasn't working. So he used a little stopcock valve next to the tank to stop water going into it. He was rather surprised to discover, when up the ladder, that there was no round cover at the top of the tank, so it's open to the air... but said he could replace that too, early next week.

The dripping stopped... for a couple of hours.

By evening, it had started again. This makes no sense at all, but then I couldn't understand how the tank could still be leaking when the mains water to it is switched off.  We now think there must be some serious problem with pressure somewhere in the system, in a way that I don't begin to understand.

Life is never entirely straightforward in Cyprus.
Posted by Sue at 17:49