It's a bit of a shock to realise that my last post was early in March. Time seems to expand and contract more randomly than usual in these Covid-dominated years.  The weeks go by, and the main topics of conversation with everyone cover the epidemiological situation in various countries, the different vaccines, and the pros and cons of cloth or disposable masks.  We check numbers of new cases daily, we chat online with our family, and we wonder if we're ever going to be able to travel again...

Back to March, and one of my first signs of spring advancing well is a freesia blooming: 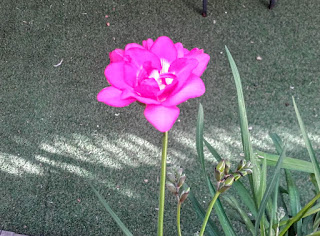 Not many of my freesias flowered this year, and those that did have all reverted to this bright pink which has very little scent. Perhaps I should buy some more in the autumn.
In March, we were allowed to have up to four visitors in our homes, theoretically for up to three hours at a time. We were able to send up to two text messages per day asking for permission to exercise, or go shopping, or to visit friends. The limit of four visitors didn't entirely make sense, since it meant that we were able to visit out closest friends (who are, currently, a household of six) but they could not all come here at the same time.
We were also still allowed to exercise outside with one other person, so I continued walking by the Salt Lake with my friend Sheila first thing, three times per week. We realised that we take the flamingoes rather for granted once they have arrived and established themselves for the winter. But I did take one photo: 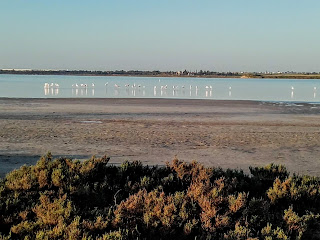 It rained, off and on; not excessively, and thankfully there were no leaks from our roof. And, as always happens in March, the yellow shrubs and wild flowers bloomed - and I managed one relevant photo of 'yellow month' too: 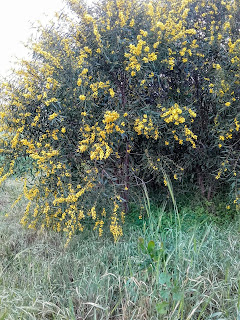 It was quite chilly, sometimes, first thing. But we reminded ourselves to be thankful...
Now that we're part of the local Anglican church, we celebrate according to the Western calendar, which is out of step with the rest of the island. So there was a service on the UK Mothering Sunday where we were given little posies: 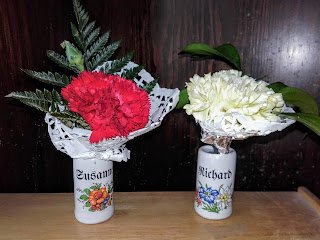 And Western Easter, on April 4th: 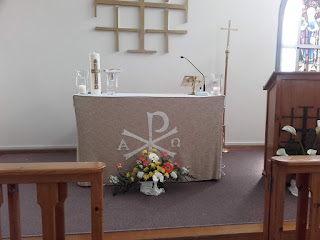 But I'm leaping ahead of myself. On the last Wednesday of March, the monthly outside book sale at the church was allowed to happen for the first time since the end of November: 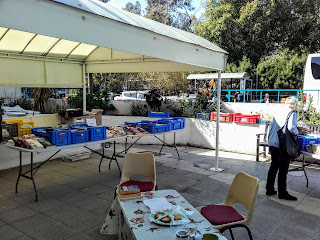 A week or so after Western Easter, Richard was on his way out when a neighbour across the street called him over, and said he should have some lemons. A tree was absolutely loaded with fruit, and if they're not picked then next year's blossom won't be so strong - and there's also the risk of hundreds of rotting lemons all over the ground. The neighbour was giving bags of lemons to everyone who would take them: 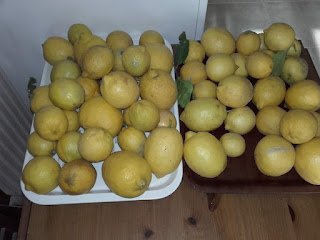 This happened twice. I froze lots of lemon juice in ice cube trays, for those occasions later in the year when I need a tablespoon of lemon juice and don't have any fresh ones. I froze larger amounts, too, in the hope that maybe one of our sons will be able to come out at some point, and I will make lemonade to celebrate. I no longer make lemonade it as it tends to give us mouth ulcers.
I made lemon cake, and experimented with three different kinds of dairy-free lemon curd, including two vegan ones which were quite successful, if a tad runny. I made candied lemon peel... and I dehydrated as many lemons as I could: 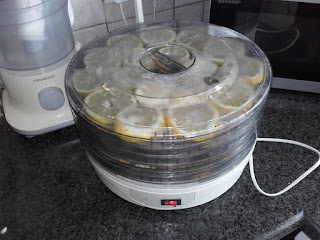 I froze them in small tubs, and made the happy discovery that just one slice of dehydrated lemon in a jug of water gives a very pleasant lemony flavour.
My birthday approached; last year we couldn't see anybody at all, so I wanted to celebrate with our friends - we are always invited to birthday meals for them, including the children. But we couldn't have more than four people in our house. They came up with the brilliant idea of us going to theirs instead - so we bought takeaway chicken, potatoes and salad, and I cooked a supermarket spanokopitta, and made extra salad and a pineapple cake with dairy-free cream cheese topping. And a dairy-free lemon cheesecake. Yes, we still had lemons... 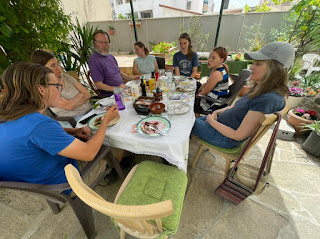 We had leftovers, too, for a couple of days afterwards.
It was around this time that I realised our patio plants were starting to look very dry, so I began watering again first thing, three times a week, on days I don't walk with Sheila.
But the Covid case numbers in Cyprus were looking very bad. Vaccination was taking a while to be rolled out, and we were seeing over 700 new cases per day reported; this is an enormous number for such a small country. The UK was doing better and better, with their extensive vaccine programme, but the hospitals in Cyprus were getting overloaded.
So as the last week of April and the first week of May were Easter holidays for the schools (Greek Easter being May 2nd) the government decreed a two-week lockdown: just one outing per day allowed, no visitors in houses, no church services, all shops shut other than those selling food, and pharmacies. The April book sale was cancelled, and while the Orthodox Churches were allowed their Holy Week liturgies and a mass for Holy Saturday, with an extended curfew until 1am that morning only, there was no congregation allowed in Sunday services for two weeks.
Bizarrely, though - or perhaps they knew that this would happen anyway - we were allowed one exception to the 'no visitors' rule, on Greek Easter Sunday. Better still, rather than being limited to four visitors, groups of up to ten in total were allowed to gather. So our friends came over for the first time this year, for a Sunday afternoon of games, a DVD for the younger ones, and a shared cold meal which ended with rather a lot of chocolate: 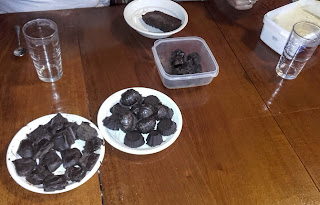 I was able to book a vaccination for a week ago, and today, at last, Richard has managed to book one too  (for tomorrow).  Vaccinations are happening rapidly in Cyprus now, and over 40% of the population has had the first one.  Case numbers are going down again - between 100 and 300 the last few days, with the hospitals doing much better - so the two-week lockdown came to an end on May 10th, and the SMS permission requirement has been shelved.
Instead, people need 'safe passes' to go to certain places - big retail shops, church services and other potentially crowded venues. We could have rapid tests, but don't fancy waiting outside in the heat, in long queues, but as we can go to most shops anyway, we're not too worried. In a fortnight's time I will be 'safe' anyway, due to having had my first vaccination three weeks earlier.
At the end of April, we had something of a heatwave - it was up to thirty degrees, a couple of times, during the middle of the day. It stayed reasonably cool overnight, and it wasn't humid, but we did start using the ceiling fans - for a few days, until it cooled down again. We had been using our winter-thickness duvet (9 tog and 4.5 tog held together with paperclips) for months, but on May 1st I removed the thin one, giving us just the medium one. A week later I switched them, and washed the medium one so it could be packed away until the Autumn. Just a week after that, I put the thin one away too, so we just have a double duvet cover. Even though it's cooled down since the end of April, thankfully, we don't seem to need more.
We also put away some of our winter clothes, and dug out our shorts and tee shirts. I'm gradually washing jackets and packing those away for the autumn. And whereas the temperatures have often soared into the mid-thirties again by mid-May, it's not happening this year. So far, anyway.  Last year, my Facebook memories inform me, it was 39C in the shade on May 19th. This year, it's a mere 26 degrees today, with 28-29 predicted for the next few days. Jeans would be fine, but having moved to the shorts part of the year, I'm somehow reluctant to switch back again.

It's good that the temperatures aren't too extreme, because Richard's boat is currently out of the water having its 'dry dock' maintenance, something he plans to do every other year. He had hoped it would be lifted out a couple of months ago, but arranging it all took much longer than usual. His Kingfisher Yacht Cyprus blog gives photos and descriptions of what he's been doing, if anyone is interested.

We need to clean our air conditioners within the next couple of weeks, and I should give the curtains their annual wash before it gets too hot to think. If only it would remain like this, sunny and warm but neither too hot nor humid...