A Long and Detailed Post about a 'Typical' Day.... part 3 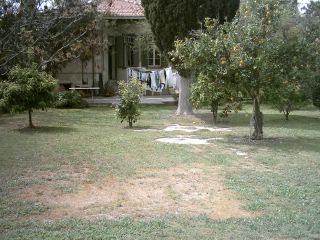 (Here's a picture showing some of my walk up and down the back garden, with the first load of laundry hung outside....)

9.30 - put my shoes on and went to empty last night's veggie bits and this morning's orange peel onto the compost heap. Watered all the flowers in the front and back garden, adding Phostrogen to the water. The back took three cans, the front about the same. At least I do a fair amount of walking even if I don't go out anywhere, since our back garden is at least 40 metres long and the flowers are at the far end, while the water supply is attached to the house!

Tim left to help at the office while I was watering the front, and when I'd finished I realised it was 10.00... just doing the watering, and a little dead-heading of petunias where necessary, must have taken over 20 minutes!!

10.00 Hung this morning's used towels out on the line to dry. Washed up from breakfast. Did a quick clean around the bathroom, then as the washing machine had done its final spin I went to hang all the laundry outside. I try to match socks on the line but inevitably there were three without partners....

Having emptied the washing machine I put in the dirty towels and tea-towels from the last few days, so I can do a 60 degree wash. I took the pillowcases off all our beds, and the bottom sheet from Tim's to add to the load and put it on.

Then I emptied all the bins into large black bin-liners and put them out. The dustmen come on Tuesdays, Thursdays and Saturdays (quite early) so I try to ensure there's always something out for them. Rubbish can get smelly quite quickly if it's not taken out almost daily, and if the bins weren't emptied so often they would attract vermin. As it is they attract the feral cats who always root around in rubbish bags, but I don't begrudge it to them if they find something tasty.

The kitchen floor was looking a bit grubby, as was the corridor outside (which leads to the bathroom and back door) so I shook out the doormat, swept the area, and then mopped kitchen, bathroom and corridor. Found it was 10.45...