A Long and Detailed Post about a 'Typical' Day.... part 2 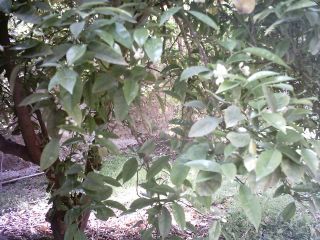 (Here's a photo of the orange tree. The blossom just about shows... unfortunately it's not possible to send the scent!)

9.00 - Took my shower; the water was just the right temperature to run the hot only. The bath was looking a bit soapy so I gave it a quick clean, then as I was getting dressed I saw a large insect on the wall. My instant reaction was that it was like an emormous mosquito - with the body at least 3cm long. I couldn't think what it was... not big enough for a dragonfly, though, so probably harmless. And it wasn't flying around. Suddenly I remembered what it was: a daddy long-legs (aka crane fly, I believe). I can't remember having seen one of those for years and have no idea what it was doing in our bathroom in the morning. I made sure the window was open wide so it could escape if it wished to... I don't like insects, and was glad I hadn't noticed it before taking my shower, but I don't like personally killing anything bigger than a mosquito.

Had a quick look at tonight's menu - we keep a four-week plan of evening meals on the fridge, which makes life so much easier. Tim organised this a few years back. Tonight is Stove-top barbecue Chicken for the meat-eaters, molasses bean bake for the veggies, with potato wedges, courgettes and broad beans. Remembered that I used up the last of the frozen pre-cooked beans, so put some more on to soak. Remembered that soya beans take a lot longer than others, so I put them in a separate pan; in the large one I used about a cup each of aduki beans, pinto beans, black-eye beans and black turtle beans. I gave up using red kidney beans ages ago when I realised they give me stomach-ache, no matter how well-cooked they are, and they're recommended to 'avoid' for my blood group in the ER4YT plans, which I loosely follow.

Went to get breakfast for myself - there's still plenty of the pear mixture from yesterday, and some lovely big strawberries. I had a bit of home made yogurt with it too. As I was about to start eating I saw Tim wander through to the bathroom in his pyjamas, then come out again, then go back with some newspaper, then come out again... 'Oh,' he said, 'I've just killed a daddy long-legs.' Ah well, that solves that one. Dan looked in at the door, dressed and ready to go, and said he was off. The performance this morning is at 10am apparently.

Tim had breakfast with me and finished yesterday's pear mixture. I commented on the current glut of pears meaning that they're selling off bags of slightly bruised pears very cheaply, yet it's spring and I doubt if they grow in Cyprus at all. We wondered where they came from - presumably somewhere in the Southern Hemisphere where it would currently be Autumn. South Africa, perhaps? It doesn't usually mention country of origin at the supermarket.

That reminded Tim to ask me if I knew what a 'tim-tam' is. Apparently one of his online friends in Australia is going to the USA soon and is going to miss tim-tams (and also Marmite). I've never heard of them...

Tim went to have his shower and I cleared up the kitchen, then realised I couldn't do the washing up since water used in the kitchen affects the flow of water in the bathroom. Still, I put away the clean glasses and wiped the kitchen surfaces. I noticed Richard's mobile phone ringing three times during the last 20 minutes or so... I'm glad our main phone isn't so active.

I checked my watch and found it was already 9.30... I wish I knew where time rushes by to. I don't seem to have done anything yet, but have already been up for two hours. Sigh.

Richard dashed into the kitchen to say goodbye; apparently there's a problem at the theatre with the lighting desk so he's popping in there to see if he can solve it before the show.
Posted by Sue at 10:19