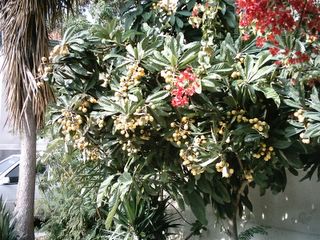 This is how our front mespila tree looked this afternoon. Packed with fruit! Yet not quite ripe enough to eat much of it. I knew that leaving it a few days would mean that birds would get at it, as it would all become fully ripe together. The solution is to pick some at this stage and cook it - they look a little like apricots, cook a bit like plums, and taste somewhere like a cross between the two, with a hint of rhubarb. I didn't want to make jam, though. There are still four or five jars left from last year's batch. Richard said he wanted some fool, though, and I thought I might as well start some freezing.

So I picked quite a few. The worst thing about loquats is preparing them; they have very large stones inside - and not just one per fruit, but about three or four. Soft, satiny and oval. So the fruit has to be washed, then halved, and the stones and stalk removed. There never seems to be much fruit left by the time the stones have gone, but still it made two kilograms of fruit in all. I froze three half-kilos in rigid plastic containers in sugar solution (1lb of sugar to 1kg water according to my recipe book - and that was enough for the three half-kilos) with a the juice of a small lemon and a dash of vitamin C powder to preserve the colour. I stewed the last half-kilo gently with the juice of a lemon, 150g sugar and some water, then pureed it in the blender and mixed with some custard in preparation for a mespila fool for tomorrow's lunch (Richard's request).

About 25 lemons fell out of the trees today - it was extremely windy this afternoon - so I also washed and pared 20 of them, and froze the parings in two containers in preparation for lemonade when there are no more lemons available. Then I juiced the lemons, plus a few extra small ones, to make two litres of juice and froze that in two separate containers. I still have a massive pile of lemons, but at least I used slightly more than the number that fell today.

I found you blog by accident and I'm glad I did so. I also wanted to let you know that I live in Cyprus (Limassol) and have a related category in my blog - maybe you'd be interested in reading it:
http://mamchenkov.net/wordpress/category/cyprus/

Does it taste different when fully ripe?

Cool to discover someone else in Cyprus!

And yes, the loquats/mespila taste sweeter when fully ripe, still a bit plum-like with something else - maybe a hint of apricot. Not really strong tasting but very pleasant.