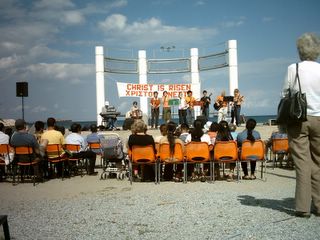 This last weekend was Easter in Cyprus. The schools were having a break, and many of the shops were closed on Friday and/or Saturday, as well as yesterday.

Richard took Friday and Monday off work, but he didn't relax ... instead he was busy building boxes for the PA system he's been putting together for use by Christian groups locally, and ensuring everything worked in preparation for an inter-church concert which took place at the sea-front on Monday afternoon. Tim helped with the soldering, and on Sunday evening all the equipment moved from the office to our house, and various of the electronic instruments the boys own were plugged in to test them.

The concert itself went very well, with the PA working far better than the smaller church system that was used last year. The youth band Narrow Gate did three biggish sections of the program, and there were a few other items in between although Tim - on his keyboard - was on the stage for the full hour and a half, and very tired by the end!

Rain had been predicted, but thankfully didn't appear. It wasn't even as windy as it often is in afternoons, and there were plenty of people sitting listening to the whole concert. Others stopped as they were walking by along the sea-front, and plenty of people helped themselves to free literature about Easter in various languages from the book table at the back.

In the evening since - for once - we were all at home and had nothing specific to do, we sat and watched a DVD together - Mr Holland's Opus, which none of us had seen before but which was excellent.

I love that movie. My mother raised me to be a huge Beatles fan and when they do the signing concert of "Beautiful Boy" I just lose it.