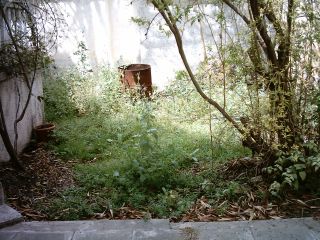 This is - or rather, was - a patch of garden near the house, to the left of the patio. There's an old oil drum which we use for bonfires sometimes, and until last Friday there were weeds up to a metre high in places. This is what the whole garden would be like if we didn't keep mowing and weeding!

With rain predicted for the weekend I set to work on this patch in the morning. I raked fallen leaves and pods, and pulled weeds. Then I realised the current compost heap was far too big to put anything else on, so I used the wheelbarrow to decant the last of the current compost, and thus declared it as a a new heap!

It did rain... mostly spitting on Friday with a few showers later. Then a major thunderstorm about 11pm, which led to Tim's bedroom ceiling leaking once again. Then it rained off and on during Saturday, and some of Sunday too. We needed the rain, but it's quite a shock when a whole month's worth arrives in the space of three days.

On Monday the sun shone, most of the time. Yesterday was lovely too, though not as warm as it had been last week. Tim got the mower out and did about half of the garden, then I did another third including the patch described above.
Posted by Sue at 11:06