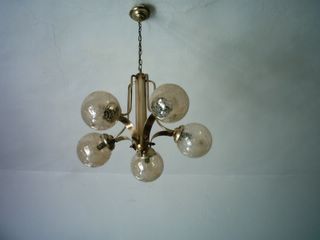 People sometimes tell us we have odd conversations around our meal tables. Someone pointed out that we often (well, a couple of times a week at least, sometimes more) get out a dictionary or atlas or something during a conversation, while eating. Doesn't seem odd to me, but we put it down to being home educators. The whole of life is about learning, after all, and we enjoy our family conversations.

Last night we were just finishing eating, and I glanced up at the lights. We have a somewhat old-fashioned five-bulb arrangement in our dining room with glass globes around them - see picture above. Until a couple of weeks ago, there was another identical one in the living-room. We've had trouble with these lights ever since we came here - the bulbs only ever seem to last three or four weeks each. Then they blow, one by one until there's only one left. At which point Richard drags out the ladder and changes them.

The one in the living room had some faulty fittings too, and about three weeks ago he was going to change them. I asked if it would make the bulbs last longer, and he said no - but at that stage he couldn't fit any new ones at all so it was constantly gloomy in there. I wondered aloud if we'd be better off with an ordinary kind of plain shade and a single bulb. We decided to go for it, and managed to buy all we needed for less than �10. Boring? Yes - but the ceilings are four metres high, and we don't exactly spend much time looking at the light fittings. But the light given out is much better. Our house group definitely appreciate it.

Anyway... last night, when I glanced up at the dining room lights, I realised that all of them were still working, despite having been changed at least a month ago. I pointed this out to the family. '

'Ah', said Richard, 'They saw what we did in the other room and they didn't like it!'

Which led to all of us telling the lights in the dining room that they better watch out, since the new shade in the other room is brighter, looks cleaner, and will almost certainly last longer and save us quite a bit over the months.

Then Tim said the old-fashioned dining-room fittings were ugly, at which point Dan said that was rude, and he really shouldn't make personal comments because the lightbulbs might be offended. So I said that was right, after all we didn't want them over-heating the glass and exploding all over him. Then Richard said that it could be worse - the lightbulbs might get deeply hurt by his comments, and might just decide life wasn't worth living at all. So I said I supposed that whether they exploded with anger or felt hurt depended on whether they were more like ENTJs (which Tim is) or ENFPs (which Richard is).

At which point... Tim said, 'Wait a minute. I can't believe this... are you really psycho-anaylsing lightbulbs??!"

And it struck us all in one moment - yes, we do sometimes have very strange conversations around the meal tables!

Is that odd? It seems perfectly normal to me. =D