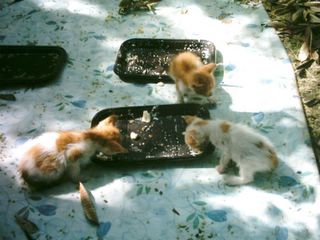 All seven of the feral kittens are now eating kitty food and cream cheese from little trays, which is so much more easier than trying to feed them from a teaspoon or my finger! This photo catches the three orange-and-white kittens, including the two very smallest who have been a bit behind in their development. Those two littlest ones still aren't very good at washing themselves although the others seem to have grasped this skill fairly efficiently, and wash each other's ears too. Soon they might even figure out how to wash their faces!

I do still give them warm Lactol in a bottle, after the main food. Rather like introducing a baby to solid food - the milk comes afterwards and is still important for comfort as well as for nutrition. But they have less than they used to, and the three biggest kittens only really want a token gulp; it's the four smaller ones who get through most of the bottle between them. We've nearly got through the can of dried Lactol I bought last Monday - since I reckon these kittens are five weeks old tomorrow, I'm going to give them evaporated milk again once it runs out. It's cheaper, and didn't seem to do them any harm when they had it as emergency rations when we found them, and they're getting the nutrients kittens need from the dried food (which actually I moisten with warm water).

Richard got back this morning from an arduous trip to Egypt where he got very little sleep, so he's slept some of today and is currently napping again. He was relieved to find that the feral kittens are still firmly outside, and we intend it to stay that way. Eleven cats in the house would be crazy, even assuming our four would allow it. The kittens are entirely happy being outside; it's warm, and assuming they go to live at the Cat Sanctuary at Paphos in a couple of weeks, they'll be mostly outside there.

The fluffiest kittens, the coffee-and-cream coloured one, is evidently a man's cat since she made for Richard immediately she met him and wanted to be stroked and cuddled. She purrs efficiently now, and some of the others have begun to purr too although it's hard to work out which ones. They have fairly distinctive characters already, surprising in such young kittens.

Thankfully it's not quite as hot today as it has been the last few days. I suppose it got up to 26-27C, but no more. What a relief.

I'm glad to see they're developing well. It's amazing how quickly it all happens, every other day there's another milestone.

Enjoy your reprieve from the heat. We are now kicking into over-drive it went up to 97F(36C) yesterday and the next serval days it's expected to hit 95(35C). I'm not quite ready for this.