On Saturday my mother returned to the UK. But for some reason, although her incoming flight two weeks previously came to Larnaka, the outgoing one flew only from Paphos.

So, as we hadn't been to Paphos for ages - at least three years in my case - we thought we'd all go there for the day. Perhaps look at the old fort, stroll a little along the sea-front, find a sandwich for lunch, wander in a few shops, and then get to the airport for around 4pm.

So much for the best-laid plans.

We left around 10.30am, and the roads were very clear. We were in Paphos by noon. So far so good. Unfortunately, we could not get to the place where Richard wanted to park. Several roads were blocked off. And although there wasn't a lot of traffic on the roads, there appeared to be a lot of it parked in Paphos town centre.

Eventually we found somewhere that seemed to be legal. It was about a ten minute walk to the sea-front. And when we got there, there were large orange boards meaning that we had no view of the beach at all. There were large diggers of varying sizes - idle, of course, since it's still the Christmas season - but nobody at all along the sea front. 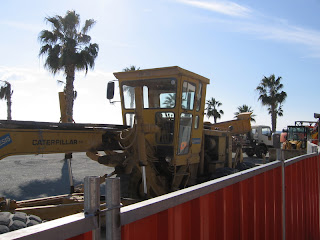 Moreover, we weren't particularly close to the fort, either. We had to squeeze our way along some of the path by shops, which must have found it very irritating that their prime location by the sea front was blocked by unattractive orange. If I stood on tip-toes and peered over the top, in one direction, it was possible to get a view of what might have been: 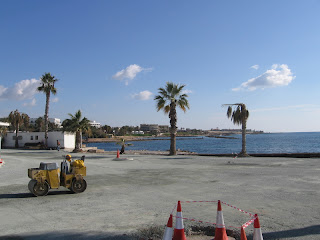 But that's not much compensation for places hoping to sell drinks and snacks and a pleasant, relaxing view of the beach.

Eventually we found the café which Richard had been to before; it was upstairs, so we did manage to get a pleasant view over the sea while we ate, and sat around for a while afterwards.

We decided it would take too long to walk to the fort, since we still had a twenty-minute walk back to the car. So we looked at a few of the tourist shops along the way. Tim did find a key-ring, and a fleecy jacket, and Richard found a tee-shirt, and I found belts for both of them, so it wasn't a wasted day. It was nice to get some fresh air and sunshine in a different place, too, although by the time we got home it was clear that I had had too much sunshine for one day.

The promenade at Paphos certainly needed some work, and I suppose it's better to do it in winter when people aren't so likely to want to swim. I wonder if it will be completed by the time we go there again... which, at current rate of progress, could be around 2010.
Posted by Sue at 15:30

It was still a nice day for you all. Cyprus seems to be a nice place to live, this idea from your blog.
Happy New Year,
Betty G