When we moved to Cyprus, almost nineteen years ago, we didn't think we would need a car. None of Richard's colleagues owned one, and the organisation had a few cars which could be borrowed, when necessary; we had to pay a mileage rate, but it wasn't too steep. For shopping trips locally, or even the occasional visit to another town, it was far better value than having to pay running expenses of a car ourselves.

But then we started attending regular meetings of home educators in Limassol, and wanted to explore the island when visitors came. When Richard's official secondment to the organisation here came to an end, we could still use their cars, but the mileage rate was higher. Then we were given a generous gift by a relative... and it seemed like a good idea to look into buying a car of our own. There were few, if any car dealers in Cyprus in the late 1990s, nor much available online. But there was a large classified ads section of the local paper, which we perused regularly.

In September 2000, we finally bought a car. A Lancer Estate, at first known as 'the car', but in recent years referred to as the old white car. It was around ten years old when we bought it, in good condition, and at a good price. I wrote in detail about it at the end of my September 2000 diary page of our family website. 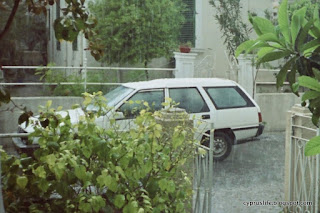 We bought it from someone at the British army base who was leaving the island. In those days, there was a complex system of taxation, and while the vendor assured us that the appropriate duty had been paid, it turned out he was mistaken. Eventually, we were able to register for a duty-free car; and then, when Cyprus went into the EU, the distinction vanished.

It's been an excellent car. We drove it through Europe to the UK back in 2001, and there were no problems at all.  At some point - I forget when - we had a reconditioned engine put in, after some problems... but it kept going. We had a towbar fitted so it could be used for Richard's dinghy: 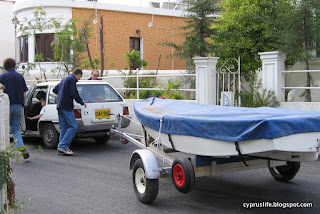 In May 2005 it started overheating when we took it any distance. Our mechanic fixed that problem, but it kept recurring. We realised that we could no longer trust it for trips further afield than the outskirts of Larnaka.

So in the summer of 2006, shortly after we moved house (and had 'change' from selling our UK house) we bought another ten-year-old car. 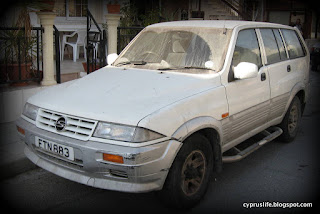 This was a Sang-Yong, a make we had not previously heard of, but at the time there were quite a few of them in Cyprus. We referred to it as the 'big white car'.  Richard bought it from a dealer in Nicosia, and it had a guarantee - of sorts. It was a comfortable and spacious car which had two extra flip-up seats at the back, which was useful when we had more than three visitors.  So, for a couple of years we used this as our 'main' car, and the old white one for the occasional short trip locally. We made the old white one available for guests, too, to get them around Larnaka - to the beach and back on a hot day, for instance.

Unfortunately, the big white car was very expensive to tax and insure. And then the Cyprus dealer for this car closed down, so it became almost impossible to get spare parts when there was a problem. We tried in vain to sell it at the end of 2008, and began using the old white car again, with the occasional car rental if we needed to go anywhere further.  Eventually, over a year later, we sold it for parts.

Then, in the summer of 2009, the car rental guy was selling one of his cars, another Lancer ('the grey car') for a good price. It was newer than our previous cars, but quite high mileage, for a Cyprus car, as it had been used by renters to tour the island. 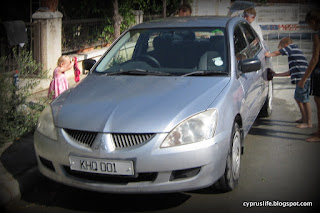 We were given a good guarantee on the car, and it proved very reliable indeed, although Richard never really enjoyed driving it.

A couple of years ago, when our son Tim was living and working in Cyprus, he realised that a former leg injury meant that he was unlikely to pass his driving test with a manual car, and his instructor suggested using an automatic. So he trawled the local adverts, mostly online now, and looked at several inexpensive automatic cars. He wanted one that would take his keyboard, which narrowed the choice down rather, but eventually he found a small car in a private sale.

They took a friend, who was working as a car mechanic at the time, to look at it, and he said it was sound, and that it wouldn't be too difficult to solve the few problems that we knew about. The make was Toyota Raum, and it was built in 1997.  It became known as the small grey car, or the grey automatic car. Richard didn't much like that one either, but it provided useful driving practice for Tim.

However it seemed ridiculous to run THREE cars. The old white car was still proving useful, with its towbar and spacious boot, and although the seats were falling apart and the air conditioning no longer worked, local friends borrowed it occasionally, and several visitors drove it locally. It was inexpensive to tax and insure, and we felt quite attached to it.

We needed the small grey automatic car for Tim, so the logical thing was for us to use that, until such time as he passed his test and wanted a car himself, and to sell the grey car. Friends took that off our hands almost a year ago, and (to our relief) it has continued working reliably for them.

Unfortunately the grey automatic car (of which we never even thought of taking photos) has not proved very reliable, nor easy to maintain. And a couple of weeks ago, both it and the old white car developed battery problems. Richard took them both to our friendly local mechanic, who told us that they would both cost quite a bit to put right, and even more to get through the MOTs, which are due in the spring.

The time had come to look at another car. Richard wanted one that he would enjoy driving, and started scouring the local adverts and dealers for his favourite kind of car, a VW Golf.

After test-driving several cars a week ago, from a local dealer, he decided that the VW Golf on offer, although very nice to drive, had too high mileage to consider. So - needing a car rather urgently, and not wanting to spend more hours searching and test-driving - we decided to choose his second favourite, a Renault Megane. 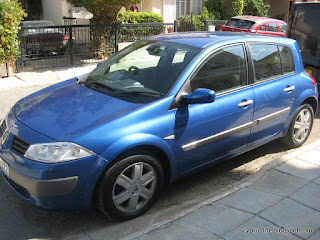 It's known, unsurprisingly, as 'the blue car'. It's about twelve years old but has only around 50,000 miles on the clock, and the condition is excellent. There's a year's warranty from the dealer, too.

We're a bit sad to say goodbye to the old white car, which can only be sold for parts/scrap now, but don't really have any attachment to the automatic grey car.

To summarise for those looking at buying used cars in Cyprus: over 17 years, we have bought two cars from private individuals, two from car dealers, and one from a car rental company.  One of the private sales, the old white car, proved excellent value, once the tax problems were solved. The other, the grey automatic, was never great. We don't think the vendor was trying to cheat us, but there's no warranty of any kind with a private sale, and since we're not at all mechanically minded, we'd probably avoid private sales in future.

Buying from the car rental firm worked well; but that's not an option that's available very often, and the choice is non-existent. They're not usually advertised at all.

Buying the big white car from the firm in Nicosia wasn't ideal, as it was a long way to go to get problems sorted, and they weren't great at doing them.  But buying locally, from a company whom our mechanic knows and recommends, with a year's written warranty, seems - at least so far - to be the best option.  We probably paid over the odds for a 12-year-old car, but think it's worth it. The body is in almost perfect condition, the engine as-new, and if any problems crop up in the first year, they should be covered.
Posted by Sue at 18:18