Ikea in Cyprus, and bookshelves for DVDs

The new Ikea in Cyprus opened in the first week of September last year.

We didn't visit it then. Partly because we thought it would be jam-packed with visitors, and partly because we were getting ready for our visit to Hong Kong and Malaysia.

Also because although we would have loved an Ikea a year previously, when we moved house, we no longer have such an urgent need for furniture, light shades, and other bits and pieces that Ikea provides so inexpensively and (mostly) tastefully.

But when we returned from our seven weeks away, laden down with rather a lot of extra DVDs amongst other bits and pieces, we realised that we needed a new storage system for them. The bookcase we were using was bulging at the seams.

All right, not literally. But we had to pile DVDs in front of other DVDs and it was all looking very crowded.

So we looked in our Ikea catalogue. In our living room, we already had two bookcases bought from friends who left Cyprus around the time we moved. They had bought them from other friends, who bought them in an Ikea somewhere in mainland Europe.

We found similar bookcases in the catalogue, in the 'Billy' system. And a couple of weeks before Christmas, Richard and I decided to visit Ikea at last.

It only took us about forty minutes to drive there, as it's the Larnaka side of Nicosia. It's pretty big, and remarkably well organised. 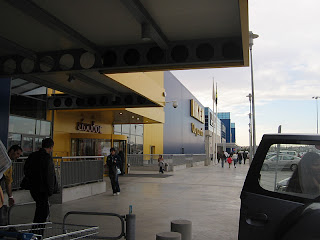 There are arrows on the floor directing customers along the main paths, showrooms suggesting how their furniture and fittings could be used. Then there are individual sections with - for instance - storage units, or lighting. And wow, what a lighting display! We had enormous difficulty finding lightshades for the house... had Ikea been around 18 months ago, we'd have bought them all there. Ah well.

I suppose we walked about a kilometre in all, following the paths through the top storey. At the end is a restaurant (with excellent prices), then downstairs are the kitchen bits and pieces, more showrooms and displays, pillows and curtains, and random plants, candles, and so on.

The only problem - and it rather surprised us - is that everything is in Greek. Only Greek. The catalogues, the signs, the forms to fill in for collecting flat-pack units. Everything.

Cyprus is a Greek-speaking country, it's true. But almost every other shop has English as well as Greek in their displays. And given that Ikea is international, it would have been easy enough to give both languages - and useful, I would have thought, since the majority of the people we saw there were speaking English rather than Greek.

We found the Billy bookcase that we wanted, figured out (with help from an assistant) what colour would be best, although there wasn't one that matched exactly what we already had. So we filled in the form. Then we went through the rest of the shop, finding various bits and pieces - large washable bathmats, light fittings and long-life bulbs for our stairs: 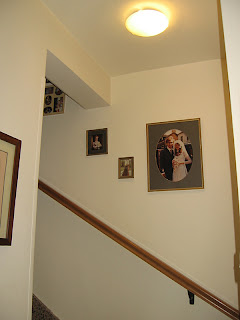 .. and some candles that Richard liked the look of.

We got to the checkout, and found that the bookcase was out of stock. But we bought everything else, and were pleased with the price. They told us the bookcase would come in 'in the New Year'.

On January 5th, Richard phoned Ikea, gave the product number, and they said it was still out of stock. 'It will be in during January or February', they said.

Yesterday, he tried again. Much to his surprise, they said that yes - it was in stock! Amazing. Cyprus stores are not renowned for having items arrive that quickly, when they're supposed to.

So we went to Ikea again. It was indeed in stock. We decided to get a smaller bookcase as well to replace one that's rather falling apart. And various other bits and pieces.... as you do. We hoped we could find extra shelving for the bookcases, but the only ones they had available were glass.

We even had lunch there. And it was, indeed, very good value.

Got home. Struggle up the stairs with the large bookcase. Richard put it together, and we realised that we definitely needed more shelves. So he took the ones from the smaller bookcase (temporarily) to make the size we wanted: 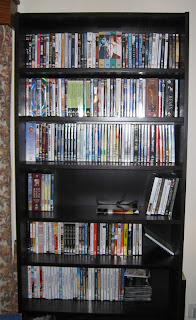 There is now plenty of space for more DVDs, and it looks pretty good. 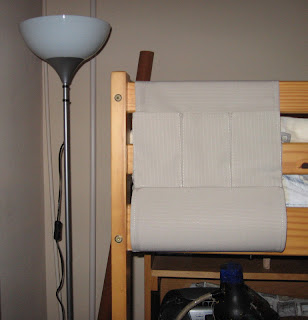 As for the bookcase that used to hold our DVDs, it's a very nice one that originally belonged to my grandparents. It's moved into my study, replacing a boring shelving unit that I had there before. And somehow it's already got filled: 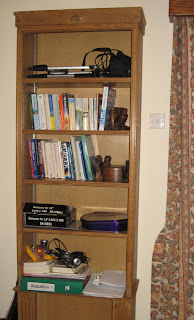 We puzzled what to do with the new DVD bookcase, however. At some point we want to put up the smaller bookcase we bought, but its shelves are now all used in the DVD case.

I hunted online to see if I could find a source for spare shelves. It seems silly to sell bookcases where the shelves can be moved, but without spares. Sure enough, I found several discussions on this very topic - Ikea Billy bookcases used as DVD cases! Some countries do provide extra shelves, apparently - but that's not much help to us.

However, another person said they bought glass shelving, which was fine for the DVDs, and we were impressed. This is what it would look like with glass shelves

So I suppose we need to go to Ikea another time, before too long...
Posted by Sue at 18:15

In GB you can check on-line whether an item is in stock before leaving home. I tried to see if this was available in Cyprus but the site was all Greek to me :-)

Yes where would we be without Ikea? I have just ordered a little table to go in our new library.

I am sorry to hear Jemima has not come home. Maybe she is staying with a friend? I suppose you have to think that no news is good news....