It's strange, really, how we associate certain foods with particular seasons of the year. It differs from country to country, too, of course. I don't think of myself as much of a traditionalist, yet we eat turkey on Christmas Day, and I make my Christmas cake, Christmas pudding and mince pies during November and December. We eat pancakes on Shrove Tuesday, and hot cross buns on Good Friday, and extra chocolate at Easter...

Most years, I make too much mincemeat. Or, more to the point, as my supply gets low I eke it out by adding extra dried fruit, or grated apple. I don't want to run out before Christmas... so I end up with a couple of hundred grams of mincemeat left over, which sits in the fridge for the next ten or eleven months.

Worse still, by the time the following December rolls around, the leftover mincemeat has usually got rather dried up and crystalline, and looks so sad next to my newly-made batch that I quietly throw it away.

As usual, I had leftover mincemeat from Christmas 2007. It sat in the fridge. Then Daniel came home for his furlough, and mentioned that he had only eaten ONE mince pie in the past few months. They're not generally made on the Doulos. To make even one per person, there would have to be 350 of them, and who can manage just one mince pie? (Well, apparently Daniel can. But that's because he popped into a British evening in December for a few minutes before being on duty. And they happened to be serving mince pies).

So I decided to overcome my strange reluctance to make mince pies when it isn't Advent. I used up all the mincemeat. I eked it out a little with extra dried fruit... but that's because I had made too much pastry. Then I had to roll the pastry thinner and thinner to accommodate the last of the mincemeat.

But.. I used it all up. And made 35 mince pies on Wednesday. 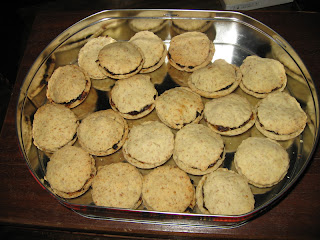 There aren't 35 left now, but there are still quite a few. More than I had expected. Perhaps because, bizarrely, they just don't taste the same when it's Lent rather than Advent.
Posted by Sue at 18:07