Daniel has been helping Richard with various maintenance and other work on his Wayfarer dinghy.

One of Daniel's talents is doing clever things with rope. I don't even know what most of them are called, but he seems to produce neat looking knots and endings - all part of being a sailor, I suppose.

A couple of days ago, Richard bought some more rope for yet more work on the dinghy (which is sitting under one of our carports at present). Daniel was going to do something useful with it... but Sophia, who barely lets him out of her sight during the daytime, was convinced he had bought her a new toy: 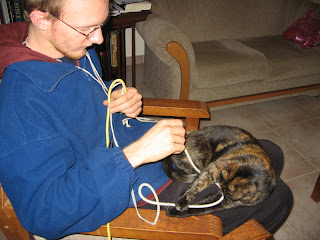 I was trying to find your email address somewhere on the blog but could not, so i thought this was probably the best way to get in touch with you.

My name is Neil, and i am the founder of an internet travel company. My team and I are coming to Cyprus next weekend as we look to set up a site for Cyprus. We currently operate in Marbella, Algarve, Dubai, Cape Town, Mallorca, French Riviera and Chamonix.

We are looking for a local partner to launch this with. I would be delighted to meet with you if that would be of any interest to you? You can find out more here: http://franchising.mydestinationinfo.com/