It's rare for Richard to be ill. He gets the occasional cold or headache, but not seriously. Not bad enough to make him stop work, anyway.

But just occasionally something strikes him badly.

There's a gastro-enteritis kind of bug that's been going around Cyprus for a month or two. I know of some families who had it badly, back in January. It's not the kind of thing that generally strikes us, so I thought nothing of it...

.. until yesterday morning, when Richard said he'd had a terrible night, felt weak and bloated, and had been up several times with other symptoms, which I won't mention in detail in case anyone is eating while reading this.

So he stayed in bed for most of the day, sipping water and eating nothing but some toast and marmite mid-afternoon.

In the evening he did get up for about an hour, but felt cold. So I brought him a sleeping bag as a cover.

Then he decided to go back to bed. And the sleeping bag stayed on the sofa. I was going to put it away later, but when I went to fetch it, Sophia looked at me very balefully. She was extremely comfortable and did NOT want me to move it: 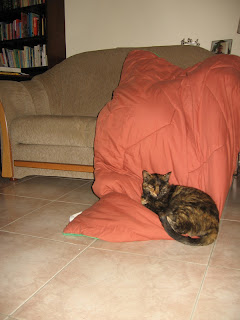 Today, Richard is slightly better, but not much. I gather a similar bug has been going around the UK so I'm not too worried - apparently it can last up to three or four days.

(Incidentally, Sophia did let me put the sleeping bag away later in the evening)
Posted by Sue at 20:20

I am a big fan of both yours and Richard's blogs. I do hope he feels better soon.