We have a serious water shortage in Cyprus. It's been getting more serious for the last year, and it's been an exceptionally dry winter. Apparently there's some snow in the mountains, which will feed the reservoirs as it melts - but nowhere near enough for the island's requirements.

So there's been a hosepipe and sprinkler ban for a couple of years. Sort of. We read that significant fines would be imposed for anyone found using hosepipes to wash their cars, or their patios, or the pavement outside their homes. Cypriots are very clean and like to wash down their patios and the street in front of their house regularly.

Did the ban stop them? No. Instead they started doing their hosing on Sundays, or very early in the mornings during the week when they knew that the police would not be out to fine them.

However, the recent warnings from the water board that water is very low do seem to have made a little difference. I don't see quite so many people using hosepipes in our neighbourhood as I used to. And I have spotted one or two men washing their cars with a bucket, rather than a hose.

It's not forbidden to water plants with a hosepipe, although I just use a watering can for our patio. Cyprus is so dry in the summer that it's important to keep trees watered, if we're not to end up as a desert.

But I hardly think it's a great example to see sprinklers on the grass (which is mostly weeds) in front of the Municipal Library in broad daylight, with some of the water not even hitting the grass... 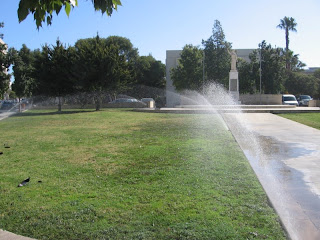 Liked your blog - might you be interested in a business proposition writing two or three articles a week on the subject of living in and property investments in Cyprus? Material would need to be original and we could help with artical subject.

My email is as follows