I'd gone to bed with a headache after our tiring trip and travel through CairoE; I woke about five thirty on Friday morning to find it had developed into a migraine. I swallowed some paracetamol and slept for another couple of hours, but still felt shattered.

We had thought of going to Madi Community Church, to meet some of our ex-pat friends from Cyprus. Friday is the main day off work and school in Egypt, from the Muslim influence, so many churches meet on Fridays rather than Sundays. The service started at 9.30am and Richard reckoned it took about an hour to get there via the Metro train, so we were up and ready for breakfast by 8am. The President Hotel had a buffet breakfast - no fruit, unfortunately, but a wide variety of breads - croissants, french bread, pastries etc - and a bit of salad and various cheeses, as well as sweetened juice, and of course tea and coffee. Not what I'd have chosen, but nice for a few days.

Since I was still feeling shattered and headachey, and Daniel felt like a morning to read, we stayed behind. I dozed a bit, and read somewhat, and took some Solpadeine at 9.30. Dan sat on the floor, and read solidly: 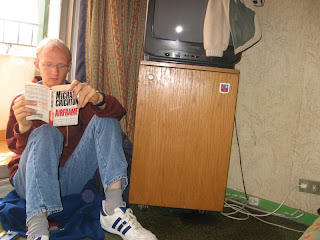 Meanwhile, Richard and Tim went off to church - and said the service was excellent. They got back about noon, and we decided to have a light lunch at the hotel. They did various sandwiches at a good price, so that was easy - and we didn't have to travel anywhere! I felt considerably better by that time, thankfully.

In the afternoon we decided to visit the Cairo museum, which meant we had to find a taxi to take us there. Taxis are everywhere, and pretty good value - it cost us 15 Egyptian pounds (LE) to get to the museum, which was about twenty minutes away. 15LE is slightly less than 2 euros (around $3 US) so it was really very reasonable. More bumpy roads and honking traffic, of course, not to mention lots of pollution from exhaust fumes.

The museum was huge, even from the outside: 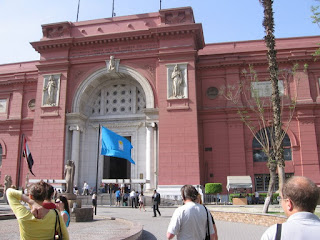 And there were a few statues outside, too, as well as thousands of people milling around: 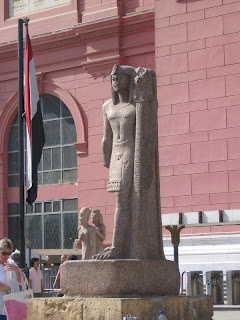 It cost us 50LE each to get in - it would have been half-price for Tim if he had remembered his student card, but he left it in Cyprus. Still, 50LE is a bit more than 5 euros, and we felt it was well worth it. The inside - where I wasn't allowed to take any photos - was enormous.

None of us are huge fans of museums, but this one was absolutely amazing. So many fabulously well-preserved artefacts, for one thing - far more so than the Greek and Roman ones we've been used to seeing. There were little tables and stools, papyrus scrolls with ink that looked as clear as if it had been written the day before, jewellery, and remarkably modern looking tools. There were also, of course, thousands of images of Ancient Egyptian deities - again, remarkably well preserved, and with the most incredible fine detail carved or painted on them.

Upstairs were some treasures from King Tutankhamen's tomb, as well as yet more artefacts. It seemed to be arranged by historical period, but there was very little labelling. Perhaps we should have bought a guidebook, although it was fascinating anyway. There were guides taking some groups around, but they seemed to talk very loudly, and rushed them from place to place, so we preferred to choose our own schedule.

I was pleased to find a few benches, since it was pretty tiring walking around for nearly three hours, but even in that time we didn't get to see everything.

In the evening, Richard had thought we might go to an unusual restaurant called 'Planet Africa'. So after we left the Cairo museum, we got another taxi. Richard's friend had told us the cost should be around 20LE again; in Egypt, you have to agree the fare with the driver before starting any journey, as they don't generally use meters. However when we mentioned 'Triumph Square' the drivers first looked blank, and then insisted it would be 50LE. Richard tried to haggle, but they insisted it would cost that much - and then one of them said he would switch on his meter, and Richard said that would be fine.

So he switched on the meter... and tried driving us the wrong way. Fortunately Richard had realised he might try to cheat us, and he's been to Cairo enough times that he recognised roughly where we were going. So when the driver took a turning that would have taken us many miles out of the route, he told him - and the driver turned around. When we arrived the meter showed 21LE, so the friend was correct.

Unfortunately, we had not taken into account that Friday is the day when families eat out, and that Planet Africa is a popular family eating place. There were crowds of people, including several children, in the foyer. When we went to ask if we could book a table, we were told it would be at least an hour... and by then it was already after 7pm. Early for Egyptians to eat, but not for us.

So Richard texted another friend who lived fairly near, and asked where we could find a reasonable meal, including vegetarian options for Daniel, not too far away. He replied that we should try 'Peking' which was just over the road. Peking turned out to be a Chinese restaurant; we're not huge fans of Chinese food, but Tim was pleased to find a highly spiced chicken and ginger dish, and there were various veggie main courses, so we had a good meal.

Unfortunately, restaurants in Egypt don't have non-smoking areas, and by the time we left we were all feeling the negative effects of smokers at nearby tables. It was about 10.30pm by the time we finally got back to the hotel... and my headache had begun again, although not too much to prevent me from sleeping.
Posted by Sue at 17:26