Temporarily out of Cyprus: Egypt, day one

We're back in Cyprus now. And I just downloaded 125 photos from my camera - more than I thought I had taken, and yet not as many as I'd have liked.

We landed at Cairo aiport at 7.15pm Egypt time (they haven't yet moved to summer time, so are an hour behind Cyprus currently). The flight was actually half an hour early. One of Richard's friends had arranged for his driver to meet us, for which we were very thankful. We got through passport control easily, having filled in our entry visa forms on the plane, and found our luggage quickly.

My first view of the airport was of a large, modern and busy place, buzzing with activity, and looking much more 'western' than those we have visited in the Gulf. Egypt is very much a mixed culture, with Christianity and Islam co-existing reasonably amicably, alongside rampant materialism. There is extreme poverty amongst an increasing number, as the cost of living goes up, and a lot of people who are very well off. As one friend commented, there isn't much left of the middle-income families.

Richard texted his friend, and the driver arrived within five minutes, in an old but roomy eight-seater van with plenty of room for our luggage. Richard had booked a hotel for us online, at a very good price, in a reasonably nice district. I was staggered at the amount of traffic on the roads, the way it all weaved in and out of other cars, with no road signs or traffic signals at all. It was astounding that there weren't any accidents, but we didn't see any.

Around the airport Egypt looked more like Bahrain than I had expected - high rise buildings, to be sure, but fairly well spread out, with plenty of trees and statues around. The roads were wide, too, and well-paved.

However it all became more crowded as we got further into Cairo, with the traffic increasing, horns blaring, bright lights flashing everywhere. I was very tired - having woken up around 5am that morning - and wanted nothing more than to sleep. But it was a bit difficult to doze off in a bumping van surrounded by so much noise, even though the journey took well over an hour.

The hotel was friendly and clean; the rooms a bit shabby but a reasonable size, and the beds were comfortable. However we had only been given a snack on the plane, and Richard had arranged for his friend's driver to take us to and from a vegetarian restaurant called L'Aubergine... so we dumped our cases and went out again, finally eating about 9pm, which is far too late for me. The food was very good, and the service was quick, so we were back at the hotel by 10pm and I was asleep by about 10.05!

I somehow managed to avoid taking any pictures of the front of the hotel (called 'President's Hotel') but here's a view from our window which I actually took the following morning: 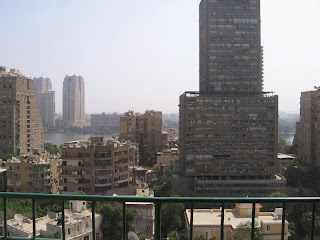