Temporarily out of Cyprus: Egypt day four. Lots of food!

Having done our major 'tourist' visits, to the Cairo International Museum on Friday, and then Saqquar and Giza to see the pyramids on Saturday, we were pretty tired by Sunday. Some of Richard's Egyptian colleagues - who he counts as friends - wanted to take us out for meals and get to know the family, so he arranged for two of these on Saturday. One lunchtime, one evening. In retrospect, that was perhaps a mistake...

Tim and I didn't want to go anywhere on Sunday morning, but Richard and Daniel thought they might go to a good value computer shop and buy some technical stuff, so they went on the metro... rather a fruitless trip, since apparently shops don't open until about 11am (and Sunday isn't a day off - Thursday and Friday are the weekend in Egypt), and the one they were aiming for didn't open even after eleven.

So they got back around noon, and we then had to get a taxi to the place where we had agreed to meet the first family who were treating us. They took us to the Grand Hyatt Hotel, which has an amazing view of the Nile, and the most incredible buffet food at lunchtime. Unfortunately my camera was in Richard's backpack, which he locked in the boot of our friends' car, so I couldn't take any photos.

We started eating around 1.30pm, I suppose. I mostly ate salads, realising how easy it would be to overeat, and remembering we had another invitation in the evening. But with a buffet, one keeps going back for more... or at least, our friends did, on our behalf. It was excellent food, but by the time I'd had two large plates of salads and vegetables, and a bowl of fruit (with a tiny slice of chocolate mousse which I couldn't resist) I was so full I could barely move.

The only problem with the room was that the non-smoking zone was simply half the room... so when people started smoking at the next table, we all moved to another place at the suggestion of the waiters.

Richard thought we might finish by around 3pm at the latest... however it was nearer 4.30 by the time our friends accepted that we couldn't eat another thing. It was good to get to know them, and we very much appreciated being in such grand surroundings with such excellent food, even if we did feel a little out of place!

Our friends then suggested taking us on a covered boat along part of the Nile. So we set out in two cars. However the traffic was unbelievably bad on the roads. It took us an hour to travel what should have taken about ten minutes. Our friends' seventeen-year-old daughter had to be at an English class at 6pm, so her mother took her there, and her father took us back to their apartment for half an hour, so we could sit down and use the bathroom, and relax for a moment.

Being in the car had left me feeling migrainey yet again; I think it must be the pollution everywhere causing them, since I was fine all morning.

While we were at their home - which was beautifully furnished and huge - Tim tried out a rather nice accordion. Unfortunately it was rather too heavy for him and he couldn't quite figure out how to use it in ten minutes: 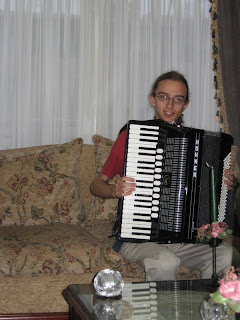 We also asked our friend if he would take a photo of the four of us. This is something we had been planning to do ever since Daniel got home for his furlough. So we sat on a long sofa, and he took three photos... unfortunately he had managed to switch the flash off (although it would probably have made a nasty glare from the pictures behind us) so the focus is rather soft, and the other two had strange expressions on our faces.. but this one wasn't too bad, although sitting in a row looks rather odd. And for two of us, our stomachs look rather bulgy from the amount of lunch we ate!

We'll have to try a better place for a family photo somewhere in Cyprus, before Daniel leaves again on Tuesday. But here's the least bad, anyway: 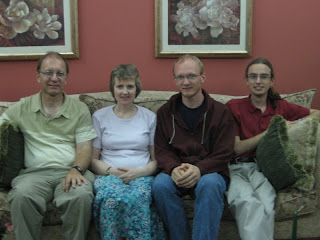 Around 6.30 our friend drove us to the restaurant where we were meeting our other friends - an engaged couple. It's a rather unusual restaurant called 'Plant Africa'. Very nice menu, excellent food again (though, alas, I could not do it justice) - and a rainforest setting, with surprisingly realistic lifesize animals in random places. There were bird noises all the time, and occasional claps of thunder.

We had some mixed appetisers, and a couple of salads to share; refused soup (to our friends' disappointment), and then I asked for the smallest meal I could find - some pasta and sauce. Richard had some kind of steak, Daniel had veggie fajitas, Tim had chicken fajitas. Then Richard and Dan shared a pavlova that would have been too much for one person even if we hadn't felt rather full before we even started.

Egyptians are very generous, and the food at both places was superb. But if I learned nothing else during our time in Cairo, I certainly learned that it's not a good idea to accept more than one invitation to a meal per day!

This elephant was right by our table. It raised its trunk and trumpeted a few times every fifteen minutes or so: 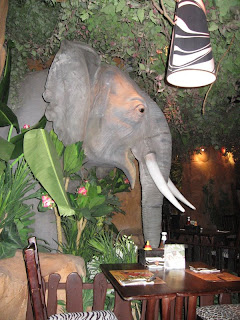 On the way in I was startled by this gorilla - here he is with Daniel and Tim on our way out: 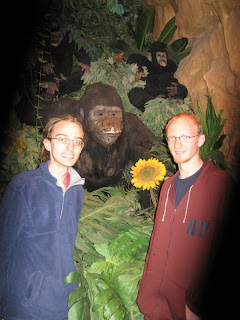 and I'm glad I hadn't noticed this rather unpleasant looking crocodile under a bridge on the way in: 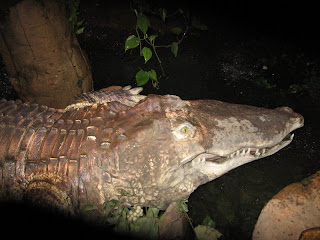 It was after 10pm by the time we finished, and my head was pounding. We still had to get a taxi back to the hotel, too.
Posted by Sue at 21:06