The Tale of Tessie and the Turtle

Many years ago, when I was a student - I think it was when I was still in school - I was given a large furry stuffed turtle. I forget who made it, I don't even remember for certain who gave it to me, or why. I think perhaps they were cool at the time - or trendy, perhaps - I don't even know what word we used to describe that concept.

Anyway. The turtle sat in our living room at our house in the UK. Occasionally I sat on it; when Daniel and Tim were small, it was ideal as a seat for them. It stayed surprisingly clean, and in good condition, but when we moved to Cyprus back in October 1997 it wasn't a high priority to bring with us... so it was packed away in our house in Birmingham, along with many other random items.

We didn't see it again until September 2005, when we sorted our our UK house, in preparation for selling it, and brought a lot more things to Cyprus. Unfortunately, the turtle, along with some children's books, were in a wardrobe which we didn't discover until after we had packed and sent the freight. So we ended up leaving a few boxes in Richard's mother's attic.

Since then, we've brought a few more books back to Cyprus each time any of us has visited, but the turtle remained in the loft. Until January, when Daniel came back on his furlough. He and Richard spent a few nights with Richard's mother in the UK, and when Dan opened his luggage on arrival in Cyprus ... there was the turtle.

I was pleased to have it, but not entirely sure what to do with it. So I put it on the sofa-bed in my study, to start with. Shortly afterwards, I noticed Tessie sleeping nearby. She often sleeps on that sofa in the sun, and I was amused to see how similar the turtle's colours are to Tessie's: 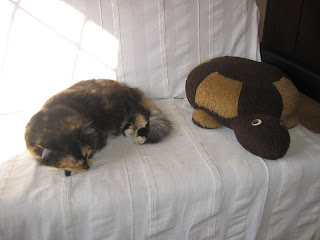 As the days went by, Tessie seemed to decide that the turtle was a friend, and I moved it to the other side of the sofa. She always likes to cover her face with her paws when she's fast asleep, to keep out the light. Then she discovered that she could bury her face in the turtle, which is soft and furry: 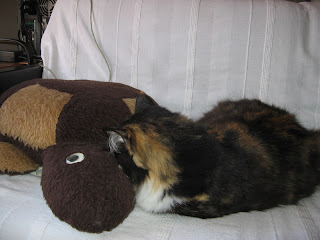 Then she started snuggling up to it, even when she was awake. Poor Tessie was an abandoned kitten, so perhaps the turtle has become a kind of mother substitute: 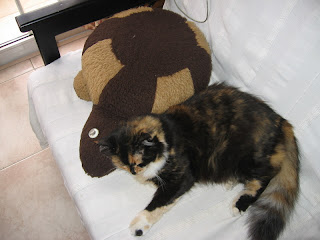 As the weeks passed, she has become more and more friendly with it, now resting her head on the turtle's head, sometimes: 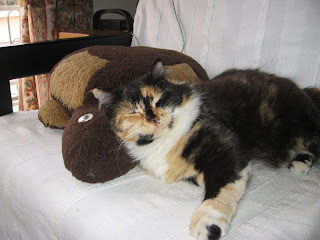 And, when she sleeps, she sometimes curls right around so as to fit alongside: 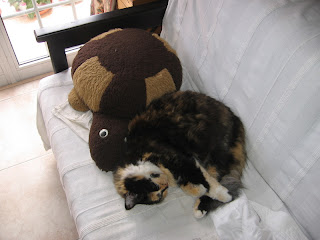 I wish I could remember if the turtle has a name... I'm sure it must have done at some point. But I'm pleased that Tessie likes it so much. I guess it will be staying on the sofa for the foreseeable future.
Posted by Sue at 16:22

Oh, so sweet. I almost want a cat. Not.
Betty G

How cute, that they are best buds!

I thought I left a comment earlier but I must have got it wrong. I loved this story and it reminds me of the large tortoise and ladybird I used to have as a child. I must ask my mother what happened to them.