In the UK, I occasionally made an iced coffee if the weather was particularly hot. But I didn't learn about frappés until we moved to Cyprus. Even then it took a few years. A friend told us that 'real' frappés are made by shaking water, instant coffee and ice together in a jar, as if making a cocktail. Rather a lot of effort, but it certainly produced a pleasant, cooling and refreshing kind of iced coffee. Here's how we made frappes (from my recipe site)... until this year. Daniel used to be the expert, and since he left it's fallen to Tim to make them. Occasionally. It always seemed like too much effort for me, on a hot and humid day.

So, finally, last Friday, we bought a Cypriot style frappé maker. It cost us all of twelve euros! If I'd know they were so inexpensive, we might have had one years ago... 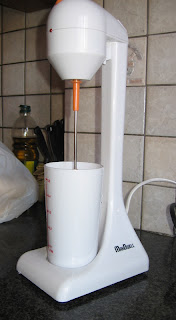 What a difference it makes! Cold water, instant coffee and perhaps a little sugar whizz up to thicken and give a froth on top in just a few seconds. More cold water, milk, and perhaps ice cubes are added - no effort at all.

I couldn't resist drinking some of it before taking the photo: 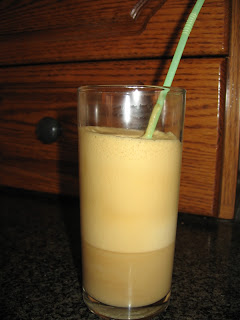 It's fine with decaffeinated coffee, too, although that would probably rather shock Cypriots who tend to have their coffee - and frappés - strong!
Posted by Sue at 16:21

Email ThisBlogThis!Share to TwitterShare to FacebookShare to Pinterest
Labels: Cyprus

Was it one of the big supermarkets that you picked it up Sue? I'll look out for one when we are next out as I do like my frappes - started them in Corfu and continued in Cyprus where the weatherreally makes them worthwhile.

It was in Metro supermarket, but I'm pretty sure Orphanides and Carrefour have them too - probably others as well.

I thought I was reading the wrong blog for a minute there, when the subject of coffee loomed. I didn't really enjoy coffee in the UK, but abroad on holiday or where we are now, in Australia, there is a huge coffee culture and I am getting seriously hooked. Lavazza is our brew of choice, I could never understand people going on about how lovely and smooth a coffee could be until now.
Great to have been catching up on your blog recently

I love coffee frappes. Yours look fantastic in the pictures. You should open a cyprus restaurants and start selling them!!!