Assumption Day in Cyprus, and a new bookcase

Last Friday, August 15th, was a public holiday in Cyprus. It was the Feast of the Assumption, an important holy day in the Greek Orthodox Church.

Since schools are still on their summer break, and many shops and businesses are closed for a couple of weeks during August anyway, I hadn't realised quite what a major holiday it was. However, this year it fell on a Friday, and we usually do our supermarket shopping on a Friday. Earlier in the week I'd noticed on some advertising mail from Orphanides that they were open on Friday 15th August, so I made the assumption (ha!) that they all would be.

How very silly of me.

We drove to Metro. The car park was full, which was reassuring.

Unfortunately, the supermarket was closed, with a note on the door saying that it would be shut all day. The cars evidently belonged to members of the Roman Catholic Church, which is right across the street from Metro. Apparently it was an important holy day for them too, since they were streaming out of the church and into the car park.

Ah well, we thought. Surely Carrefour would be open. So we drove there.

Never mind, I remembered the junk mail from Orphanides. I don't much like it as a supermarket, but it sold the things we needed. So we drove there.

When we got back home, I found the junk mail concerned. Sure enough, it said the stores would be open. What I hadn't noticed (since it was all in Greek, anyway) was that underneath was a listing of several of the stores - in Paphos, Limassol and Nicosia. Presumably they were the ones which were open - but not the one in Larnaka.

Oh well. It wouldn't have been a major problem (since we can get milk and bread from the bakeries, which are open every day other than Christmas and Greek Easter) except that we had guests coming for a meal that evening. But I adjusted what I had planned to cook, and everything was fine, if a little annoying.

Richard had decided to take the day off, anyway. He thought he might clean some of our air conditioners, which hadn't been cleaned for a couple of years. We had found some of the special anti-bacterial spray at Kleima a few days previously.

So he went to look for the step-ladders in the shower.

Yes, you read that correctly.

Our front door goes directly into our living room, so there's no useful hallway to dump things, and nowhere to put a bureau or cupboard for that purpose. However, near the front door is my study, which was built as a guest room. And it has a shower in it. Not very big, with no natural light, so it would be horribly claustrophobic to use. But it's extremely useful as an extra cupboard for storing things.

Mostly it is full of Richard's sailing things. And some step-ladders. And a few other random things which we haven't found homes for.

So, when he went to look for the ladders, he was nearly knocked over by a large box falling out. Inside the box was a bookcase we bought from Ikea some months ago. We want some new bookcases in the dining room, where our old rattan ones are (a) too small and (b) being rather destroyed by the cats. But although we measured, we weren't exactly sure that this particular unit would look right. So we just bought one.

Then when we got it home, we realised that although the size might be fine, the colour was too dark. But we thought we'd find a place for it somewhere... and that place, for six months or so, has been the shower. And a very annoying place it is, too.

So I suggested we put it together. And perhaps use it as our recipe bookcase, since our current one is also rattan, and subject to the same problems as our other rattan bookcases. Only more so.

So we (well, mainly Richard, with me holding a few bits here and there) put the bookcase together. Ikea "Billy" bookcases seem very well constructed for relatively inexpensive chipboard items. Pretty heavy, too.

We weren't entirely sure it would look right replacing our ancient rattan recipe bookcase, but when we'd put it there, we decided it was MUCH better. We only wish we'd thought of it sooner.
The only problem was that three stuffed shelves of the rattan bookcase - and a few extra books that wouldn't fit - take up less than two shelves of the Ikea bookcase. So Richard moved the Encyclopedia Brittanica, which we're looking after for some friends, thus creating more space in two other bookcases elsewhere in the house. 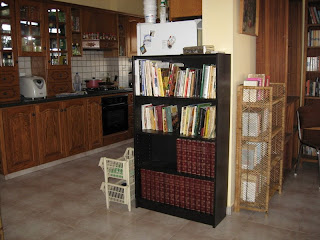 Oh, and Richard did eventually get to cleaning four of our air conditioning units with the anti-bacterial spray. One of them was particularly gungy, so it was probably well worth doing, even though there was a rather artificial flowery smell emanating from them for a day or two afterwards. At some point he'll do the other three in the main part of the house, and the two in our guest flat.
Posted by Sue at 20:46

Great picture Sue. We've been home a little over 2 wks. and it's good, once again, to read your blog. Thank you again for your hospitality. John and Aidan would like to take a raincheck on the sailing with Richard. Aidan had a great summer. He wants to return! Blessings.