Visiting the Salt Lake in a busy week in Cyprus

So, another week has flown past. We're getting used to our 'empty nest', although it still seems strange at times. It's good to 'see' Tim fairly often both on Instant Messenger and Facebook, and I seem to be coping fine - except when someone asks me how I'm coping!

On Wednesday we had ten people for lunch - colleagues and families who are currently on-island - and I was very relieved to have the dishwasher, meaning that within twenty minutes of everyone leaving, the house was clean and the dishes being washed.

On Friday we had some friends over for a meal in the evening, and played a couple of games of Scrabble, which was very enjoyable.

Oh, and I've been enjoying playing Scrabulous and other word games on Facebook, with Tim and others. If anyone wants to challenge me, just go ahead...!

On Thursday evening Richard and I decided to go out for a walk to the empty Salt Lake. He had taken some colleagues to the airport that morning, and was surprised to see that the salty surface looked reddish brown, rather than the usual white (or, at least, greyish white).

The Salt Lake Park is less than ten minutes walk from our house. We noticed that some of the trees had been cut down, making it feel much more open than previously. We also noticed how very brown it all looks after so long without rain: 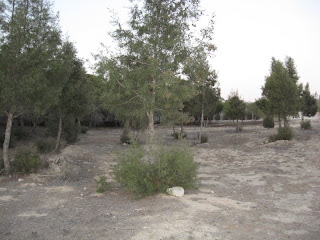 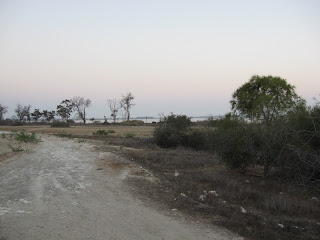 When we got closer, it did indeed look a bit red, but then the sun was starting to set so it was probably at least partly reflection. Oddly, it looks as if there's water in the lake - but of course it's as dry as anything. It's been dry since about early May this year, after one of the dryest Springs on record: 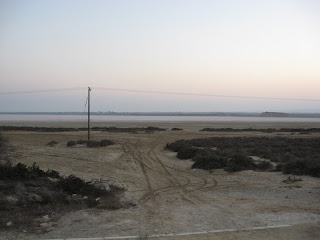 If you click the next photo, you can just see the 'misty mountains' in the distance... 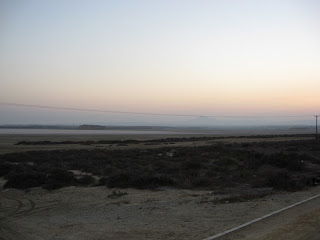 Thanks for sharing this post and making me part of your lovely visit.

I am planning to visit cyprus towards the end of june. Collecting all information on cyprus and found this to be an informative post.