A few photos from my six weeks out of Cyprus

I've finally uploaded all my photos from the camera to my computer in Cyprus. Of course, most are of relatives and friends - I shall get prints of those, and obviously won't post them publicly here. But I did take a few of places, and Daniel and Tim... so if anyone's interested, scroll down. As with any photos on this blog, you can click any of them to see a larger version if you want to.

As mentioned below in another post, we visited Christ Church, Selly Park several times. This is where Tim has decided to attend for the next few years: it's one of our supporting churches, and we all belonged there for a few years before coming to Cyprus. There were plans afoot to knock down the old, delapidated building even before we moved here (nearly eleven years ago) and it's taken this long for the new building, finally, to be put in place.

In October last year, we happened to be in Birmingham when the Bishop laid the foundation stone, and saw the beginnings of the place amidst scaffolding. Now, just a couple of months after the new Christ Church was opened, we were able to see it: 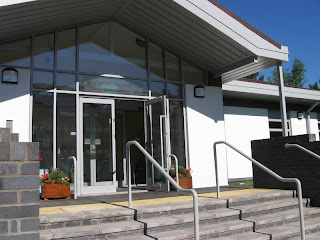 We were very impressed. It's spacious, and adaptable with plenty of rooms, but not in any way pretentious. The kitchens and loos look excellent, yet the whole place still has the right feel about it - it's the old 'church centre' (as it used to be called) as it should be!

Tim has already played the piano there for a couple of services, and guitar for a couple more; he's organising the music for the holiday club later in the month, and hopes to help with some of the younger youth. So much for his idea of not getting involved until after his course started!

Tim set my mother up with broadband wireless internet access, and then tried to enable his mac to work with it. He's had a known problem with his notebook for eighteen months now - the built-in wireless connection simply stopped working. He was able to order a replacement from the USA, fairly inexpensively, and spent an hour or two taking his mac to pieces and installing it: 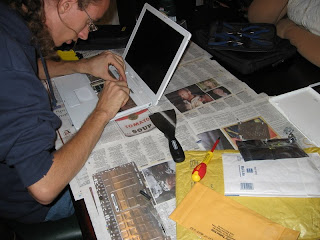 Unfortunately, it didn't work for more than about five minutes at a time.

So in the end he bought a wireless stick, even more inexpensively, from Argos - he didn't want something extra to carry around, but it works faultlessly.

The first weekend we were in Birmingham, Daniel came to visit us. The second weekend, I went up to Carlisle to see him. It's very strange that, while train travel is very expensive if you book on the day, it's extremely good value if you go into the station (or online) and book in advance.

I enjoyed seeing the scenery and even some of the stations on the three-hour journey. This one seemed like something out of Victorian times: 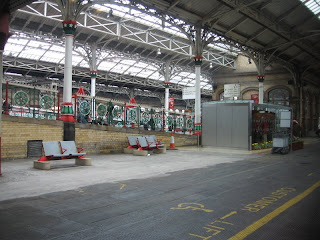 It was wonderful to see where Daniel was living during his two months training in audio-visual work in Carlisle. He was in a small house, shared with two other guys who were away at the time I visited. Shortly after he arrived, he wrestled with his conscience before buying a very inexpensive espresso and latte making machine - so of course he showed me how it worked: 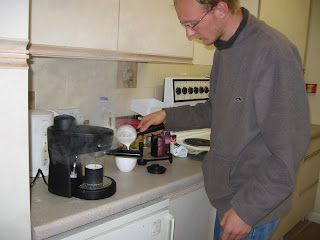 And made me a very nice latte with chocolate sprinkles on the top. Or is that a cappuccino? I never really know the difference, not being much of a coffee connoisseur. Anyway, it was very good: 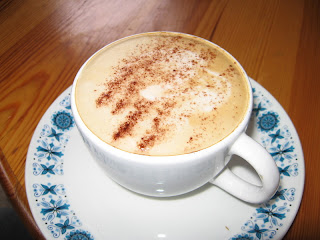 We had a pleasant, peaceful weekend doing a lot of walking, exploring an excellent second-hand bookshop, and reading. Here's the river in a park he took me to: 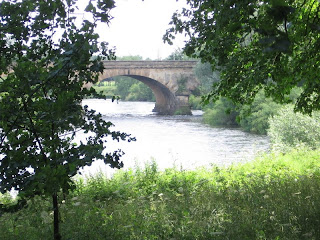 and a photo of Daniel that I was pleased with: 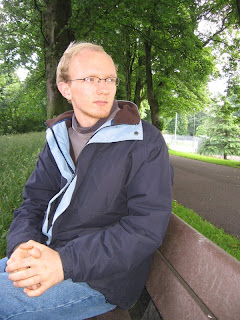 Here's Carlisle Castle. We didn't go in - neither of us is particularly interested in history, and one had to pay to go in. But it looked quite nice from outside: 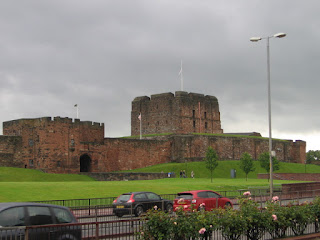 After I was back in Birmingham, Tim's new digital piano arrived. He had considered shipping his large keyboard from Cyprus, but it would have cost almost as much as buying a new one in the UK. He was given some money by his church before he left, and had some Christmas money left from last year, so we spent a morning checking out the options, and getting to know the Birmingham buses a bit better too. Tim eventually chose a Casio keyboard with legs (I'm not entirely sure what is the difference between a keyboard and a digital piano) - it's fully weighted, touch sensitive, sounds good, and fits nicely in the corner of his attic bedroom: 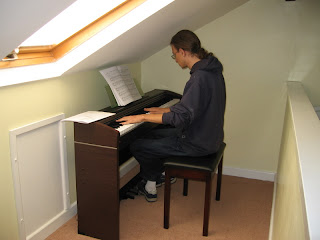 Shortly before Richard arrived, I was able to visit a friend who I mainly know via an email list, and someone else I had not previously met. We had a very good day, which culminated in my introduction to Malteser cake, which is delicious: 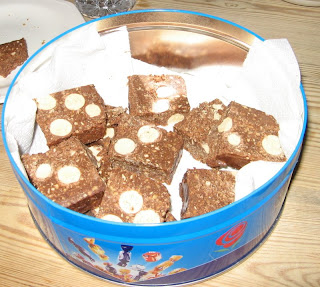 After Richard arrived, we had a busy week in which we visited about ten different sets of friends - all of whom invited us for a meal, sometimes the whole day. It was great to catch up with the last year or two, and eat good food. But it was also nice, occasionally, to take a little time out - such as when we went for a short walk around Cannon Hill Park: 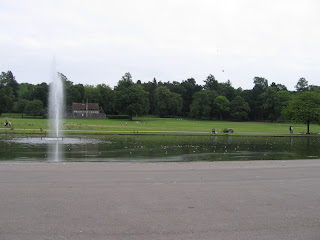 Then, after our busy week, I was able to meet three of my closest schoolfriends, one of whom I hadn't seen for about twenty-seven years! We met in the city centre, and saw how much Birmingham has changed since we were all at school there. We had lunch by one of the canals, then went for a walk and even a short canal trip. Not everyone is aware that Birmingham has more miles of canal than Venice - although over a rather larger area. Here's part of where we walked: 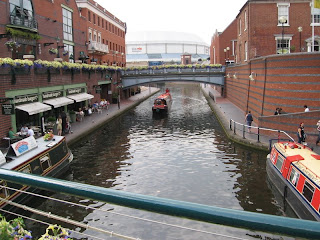 After that, we went to Cardiff for a couple of days to visit my sister, then down to Sussex to stay with Richard's mother before Richard and I returned to Cyprus earlier this week, leaving Tim behind to start his studies in September.
Posted by Sue at 14:12

That looks like a cappucino, I think. Nice to see you back and blogging, sorry to hear about your poor house sitter, I hope she is recovering.
xc

Thanks for sharing these photos,they are nice.