Chaos at the Fanoroumani/Airport Road crossing in Larnaka

It was shortly after 8am when I set off to walk to the Post Office this morning. When I got to the crossing by Fanoroumani Church, which was pretty busy at that time of the morning, I couldn't - for a moment - work out how on earth I was going to cross.

The traffic lights were not working.

I suppose the problem is the road works, which are springing up all over Larnaka, as drainage pipes are installed. Perhaps a cable had been cut. Or maybe the power was switched off deliberately, although it's hard to imagine that anyone would do so at such a busy time of day.

There were two uniformed men looking as if they were doing something with a box, which perhaps controls the traffic lights. Or at least the power to the lights. Or rather, one man was doing something, and the other was leaning on the fence watching. Perhaps as a safety precaution. Anyway, whatever it was they were not successful in the time I was there. 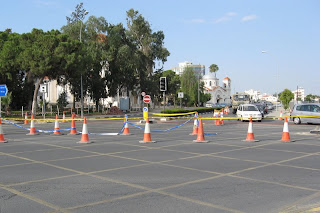 Fortunately the drivers were being reasonably courteous, and most of the traffic was moving, albeit rather faster than usual with some near misses. There was a gap in the cars so I was able to cross after a few minutes.

I had already decided that I would probably walk through the town and return by a different route, so that I could pop into the Froutaria (since tomorrow is yet another public holiday). This confirmed the decision for me.
Posted by Sue at 17:24